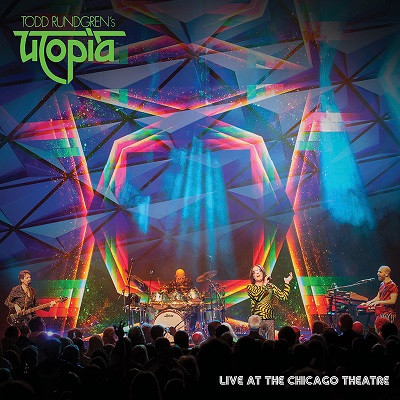 Live at the Chicago Theatre by Todd Rundgren's Utopia

Todd Rundgren has made a name for himself since day one. From playing the guitar when he was a teenager and forming the psychedelic garage rock band, the Nazz in 1967, and then embarking on a successful solo career with his third studio album that was a breakthrough for him in 1972 with the release of Something/Anything? And forming another band in 1973 that crosses over fusion, progressive rock, and pop, Todd Rundgren’s Utopia.

And after a 32 year hiatus, Utopia have returned to the stage. They recorded and performed at the Chicago Theatre on May 22nd last year. It is also the same venue where King Crimson live show on June 28, 2017 during their Radical Action tour in the United States. Now let’s get straight to the 2-CD set of Todd Rundgren’s Utopia’s performance at the Chicago Theatre.

On this live recording which is released via Cleopatra Records, you can just close your eyes and imagine yourself at the venue by seeing Todd Rundgren on Guitar and Vocals, Willie Wilcox on Drums and Vocals, Kasim Sulton on Bass, Guitar, and Vocals, Gil Assayas (GLASYS) on keyboards and vocals. They bring both their sound and the state-of-the-art vision to give the audience an evening they’ll never forget.

‘Rock Love’ is an incredible live favorite as Gil plays the swirling synths and keyboard bass by helping Utopia into this pop-orientated shuffle as Kasim’s guitar riffs by going into his lead guitar exercise. He gives Gil a chance to take turns throughout this exercise as it becomes this film-noir like groove by searching more clues that the Riddler has given them with an extended twist.

‘Utopia Theme’ starts the album off as Todd prepares the roaring crowd by embarking on their 2 hour adventure through a 14-minute take of the suite with a galactic punch. You could hear Willie setting his drums as if it becomes these consoles for the starship enterprise. Gil takes these synths inside a portal to battle the forces of evil while Rundgren’s guitar seers through these epic mountains by showing his nod between Pink Floyd’s Meddle and Frank Zappa’s Over-nite Sensation.

And after the first six minutes and fifty seconds, Todd begins to sing the line “City in my head/Utopia/Heaven in my Body/Utopia/It’s time for me/For me to go!” It has this calm after the storm for the band embarking on this strange planet before they head back home to Earth. I love the moment where Gil gives the audience a real jolt before Todd’s marching rhythmic vibes that has audience clapping to the beat of Willie’s drum beat.

From the moment that Gil begins to play this fanfare into on ‘Overture/Communion with the Sun’, it fills up these halls inside the venue. You can imagine the rising of the pyramids as an epic choir before the beat kicks into high gear. The background vocals which I believe it was Kasim and Gil do some incredible harmony together. It has a baroque-pop twist in the last 3 minutes before Todd, Gil, and Willie goes into the attack in this brief solo as Gil follows Rundgren to reach the climatic end with a high note.

Listening to Utopia’s take of The Move’s ‘Do Ya’, showcases Rundgren’s roots of the pop genre by honoring the master himself, Jeff Lynne. What Utopia do on this track is bridging over the genres of Glam and Symphonic Rock for the song and the audience themselves get a real kick out of the song.

Now Willie Wilcox not only can play the drums, but he can really sing on ‘Princess of the Universe’. Here, they bring the audience back in time for this crossover of the New Wave genre meets Cream’s ‘Badge’ with a motorcycling rhythm while Kasim Sulton’s beatle-sque arrangements on his vocals with ‘Trapped’ delves into the styles of The Raspberries featuring Eric Carmen.

Both he and Rundgren’s harsh vocal sounds, blend well together to capture that power pop meets hard rock punch at the Chicago Theatre with a real jolt of electricity. But when Kasim channels the styles of Roger Hodgson’s lyrical structures from ‘Set Me Free’, you could tell that Utopia are honoring Supertramp’s ‘Breakfast in America’ and Hall & Oates’ ‘Kiss on my List’.

‘One World’ is a real treat. When I was listening to this, Todd channels the mastermind of Be Bop Deluxe’s Bill Nelson. I can imagine they listened to the song ‘Ships in the Night’ and tip their hat to Nelson’s arrangements and showing their appreciation to his music. The audience are not just enjoying the song, but clapping along near the end section of the piece to lend support to the band.

Now understand, this was my first time delving my toes into the waters of Todd Rundgren’s Utopia. But after listening to the 2-CD set of Live at the Chicago Theatre, it made me want to go back and listen to some of those albums to see what I was missing. And this for me, was not just an ear-listening experience, but almost like being at that concert to be a part of that journey from start to finish.