(((O))) Review: Some Became Hollow Tubes – Keep it in the Ground 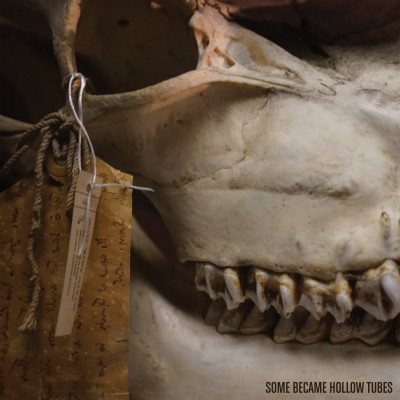 Keep it in the Ground by Some Became Hollow Tubes

Keep it in the Ground is the debut album from Some Became Hollow Tubes, a new duo consisting of Eric Quach, who is thisquietarmy, and Aidan Girt of Godspeed You! Black Emperor. That’s it. Review over.

With that type of pedigree you don’t need waffle, just click the link below and sample the music before you buy it. What you have here is experimental and drone rock royalty getting together for a freeform jam session. And it’s lush. From the first bar the absorbing drone pulls you in. It’s quiet, almost hesitant at first, and the intensity builds from there on. There are six ‘tracks’, each with a long, obscure title, but the flow of the music is continuous, and the album plays more like a series of movements in a larger suite than any type of discrete song-based work.

This is much like Godspeed’s approach to music-making, where names of tunes, breaks between ‘tracks’ and length of songs are tossed about at the mercy of musicians who know that none of that stuff really matters: it’s all about hoisting the listener onto a magic carpet and propelling them through the swirling maelstrom of ephemeral loops, drones, riffs, drum rolls and rhythms.

What sets this apart from the protagonists’ day jobs is the seeming lack of structure in each tune, apart from a general ramping of intensity from beginning to end of the album: the tracks just get taken where the musicians want to go at the time. This gives the whole work a feel of an improvised jam. It’s marvellous! Distinct guitar parts are kept quite low in the mix – it’s heavy on effects and synths. There are lush atmospheric whooshes that lift the tracks, there are quieter contemplative parts steeped in reverb and shimmer. But what keeps the attention, and what ratchets up the intensity in later tracks, is the drumming. I don’t normally notice drumming, I have to say: I notice riffs, melodies, heavy bits, general vibe. But the percussion on Keep it in the Ground is mesmerising, especially in the second half. It rolls, it fills, it propels the music along. And fifth track ‘Dog Faced Propulsion’ just rattles and bursts with drum-powered energy. Stand-out track, the intensity, momentum and sheer thrill of ‘Dog…’ is riveting.

The duo behind Some Became Hollow Tubes are clearly a match made in drone heaven, showing a very special musical chemistry. In their debut they have made a thrilling, mesmeric and totally absorbing album. Put the headphones on, turn it up, and you will be transported in the way that only drone-heavy, repetitive music can do. You won’t be disappointed.