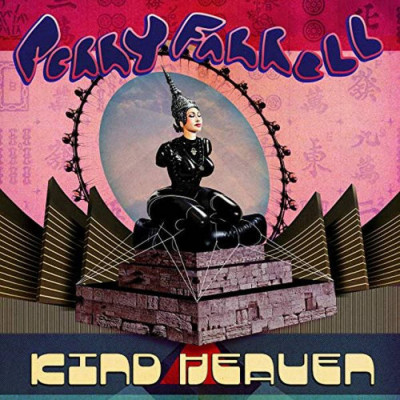 No one can accuse the New York born Perry Farrell as dull. A massive contributor and supporter of alternative rock music over the years, as well as being an alternative rock icon himself. Rightly or wrongly, Jane’s Addiction will always be the band that every musical output accompanies his name will be compared to and judged against.

The unmistakable voice of Perry and his flair for earworm melodies is in constant evidence on Kind Heaven. Co-producing with David Bowie collaborator Tony Visconti, unsurprisingly, the album is big sounding, in places bold, flamboyant, and expansive with ideas, but every track is taut, expertly produced, concise, and even laced with modern pop smarts.

But, Kind Heaven’s initial opening set of songs will cure hunger pains for Jane’s Addiction starved fans. Opener ‘(red, white, blue) Cheerfulness’ has a spring in its jaunty step, as Perry reminds us “what is the new world coming to“, before he invites us to “turn off and tune in.” It’s an instant reminder of how we have missed him. Then ‘Pirate Punk Politician’ is all funk rock thrust.

From here on in, Perry and his cohorts – the album features many contributors including Dhani Harrison (Beatles George’s son), Elliot Easton (The Cars guitarist), Taylor Hawkins (Foo Fighters drummer) – delve headlong into a broad range of influences, ‘Snakes Have Many Hips’ weaves and bobs between vaudeville, symphonic soundscapes, and pop rock. The big sounding, Blondie esque ‘Machine Girl’ would have once had hit single all over it, but as I am someone who has no idea what is likely be in the singles charts these days, this may not be the case anymore. Nonetheless, catchy, it mostly certainly is.

Those who have followed Perry Farrell over the years will know to expect music which will manoeuver down different colourful corridors. But, the question is, exactly where? As Kind Heaven progresses, it becomes apparent, big pop rock flavours will be massively applied. And this said flair for melodies are scooped up high on the earworm ‘Where Have You Been All My Life.’

It does feel like the album has been building and brewing up to the closing two songs ‘Spend The Body.’ Initially sounding a bit like Toni Basil’s ‘Mickey’, it quickly turns into a flamboyant, Madonna dance-floor pop stomper. While ‘Let’s All Pray for This World’ is a modern update of E.L.O at their most Beatles’ fanaticism. And, as the title suggests, Perry circles back to the near opening lyrics of the opening number to remind us of the current fearful political and environmental world climate.

Of course, as a massive Jane’s Addiction fan, Kind Heaven does lack the outsider bohemian danger of J.A.’s work. But, hopefully he will return to the studio one day with his most famous band. Despite this, and my mind changing reservations to this overtly commercially driven sound, there is no denying how bloody catchy some of these songs are, and the tons of production ideas and musical influences at play. If you can put Janes Addiction out of your mind and enter with open ears, then there is much to enjoy.