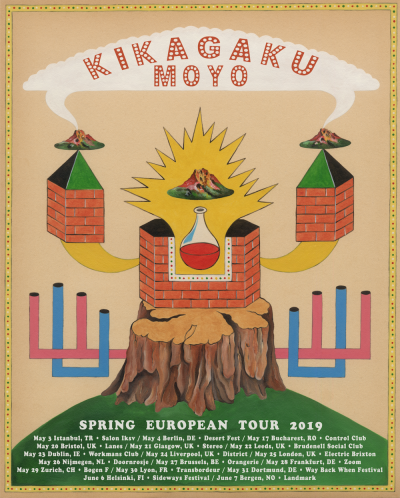 It’s a bit of a cliché that Scottish weather is usually situated somewhere between ‘damp’ and ‘miserable’ on the meteorological spectrum but on the occasions the sun is out, the atmosphere often picks up to match. Maybe that’s why Stereo has put on a bill that is so chock full of good vibes that you could almost forget you’re currently in a basement with a bunch of strangers while everyone else is getting their yearly dose of vitamin D. With locals Nekkuro Hána opening the show, the evening gets off to a chilled start, their kicked-back proggery taking on a noticeably Floyd-esque tone; but gradually, they ramp up the energy, the musicianship and the willingness to take their sound anywhere and everywhere.

Their set straddles funk, prog and psych and ably harnesses the soul of what makes such music exciting, utilising a tight but expressive rhythm section and frantic bursts of six-string wizardry to create the kind of party atmosphere that the occasion demands. Mashu Harada’s focus is admirable, his deft fretwork never detracting from the loose-is-more ethos they seem to exude, though between the energy across the board and the nowt-more-impressive synth freakouts there really is nothing that can be faulted with these lads.

Though Glasgow has, in recent years, become something of a second home for any Japanese psych bands passing through, Kikagaku Moyo’s presence is still cause for celebration. Conjuring up images of sun-dappled meadows and days of hashish-scented halcyon bliss, they make full use of their time to totally annihilate any preconceptions of what a band like them are supposed to sound like. Sure, they can lay down chill riffs that drip reverb, and Go Kurosawa is the kind of drummer who can slow down a jam to where it seems to hang perpetually in the ether, but when things seem ready to grind to a halt, they are more than ready to hit out with a mammoth blast of Hawkwindian insanity.

In a similar vein, Ryu Kurosawa’s mastery of the sitar is something spectacular to behold, not just for his speed and precision but also in how he can bend its tone and range to his will. His approach is a clever amalgamation of eastern scales and western delivery, and when it’s pitted against the lazy, hazy swagger of ‘Green Sugar’ or ‘Gatherings’ more urgent, kinetic assault, it becomes clear how vital he is to KM’s soul. Elsewhere, ‘Dripping Sun’ lays down the one of the tightest, funkiest bass workouts that Stereo has seen in years, and the room descends into a sweating, bouncing, moshing frenzy that never quite subsides.

This is a truly electrifying experience, the kind that can bring together everyone in a non-cheesy sense of cosmic oneness, and that’s because their approach is so earnest. While others steep themselves in retro chic, for Kikagaku Moyo the journey is free of irony or kitsch. It’s a musical encapsulation of simpler times, of losing oneself in a great riff or a prolonged, mind-melting sitar solo (and there are plenty of those tonight) and the room is ready and willing to tap into that, and to return their own manic energy. This is a living, breathing kaleidoscope; a swirl of colour, shape and sound. For a band who embody that on record anyway, tonight they have truly outdone themselves.