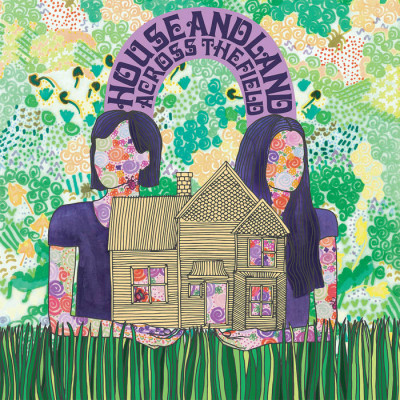 Across The Field by House and Land

Many artists that tackle what is called traditional music sounds suffer an often insurmountable problem – they have to decide whether they want their music to sound ‘modern’ ie, whether they want to fully transform traditional sounds into something that sounds truly current, or ‘old’, ie something that holds strictly to what the music sounded in the time it originated from, including the recording process.

Rarely are they able (or want) to achieve a balance, where the music has the elements of both modern and old, thus acquiring that timeless quality where it is almost impossible for the listener to say when the music presented was actually recorded, like say, any of the first few The Band albums.

I guess that is a perfect cue for House and Land and their latest album Across The Field. Based on it, the North Carolina duo (guitarist/multi-instrumentalist Sarah Louise and fiddler/banjoist Sally Anne Morgan), should be placed in that privileged category among recent folk music artists, along with, say, Rhiannon Giddens, that are able to take an absolutely ‘antiquated’ set of folk songs and make them sound fresh as they were written yesterday, ie, give them that timeless quality such music deserves.

It seems easy, but as the saying attributed to B.B. King goes, it is the simple things that are hardest to play – if you take her the opening track ‘Two Sisters”, with its dual vocals ‘traditional’ instrumentation interspersed with runs of electric guitar, or the extended Grateful Dead-like jam of ‘Carolina Lady’, you just know that the music is there, it is present, it exists and it is a joy to listen to. In essence, House and Land remake and remodel this set of seven traditional tunes and still retain their original feel at the same time. Brilliant album!