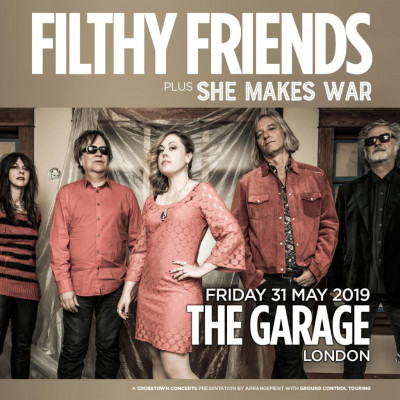 Side projects can have a tendency to fall under the radar, but Peter Buck has been keen to point out in recent interviews that he is keenly committed to Filthy Friends. Since the termination of R.E.M. in 2011 it has been a rarity to catch Mr Buck play guitar live, so I’m rather surprised to find North London’s Garage only half-full. Even more so, when Filthy Friends also consists of Sleater Kinney’s Corin Tucker on vocals. which simply adds to the gratification of seeing them and the rest of the band – Scott McCaughey, Linda Pittman, and Kurt Bloch – under the same roof.

Promoting second album Emerald Valley, they open with one of its louder heavier numbers, ‘November Man’, which brings to mind R.E.M’s Monster robust rock thrust. They proceed to deliver an hour-and-twenty-minute set of incredible tightness. Linda Pittman’s impressive, sturdy drumming, Peter Buck’s rhythm guitar and Scott’s unflashy bass hold it altogether, while lead guitarist Kurt Bloch is clearly having a ball adding dextrous solos and riffage. When Corin straps on the guitar for a few numbers they are like Television on steroids, especially the midway section in ‘The Elliott’.

While the excellent sound, intricate guitar interplay, exceptional drumming, and good solid song-writing form the basis of an enjoyable classic sounding Indie rock experience, Corin Tucker’s vocals are the chocolate sprinkles on top which really hold the attention. Her voice fits somewhere between Patti Smith, Chrissie Hynde, Polly Harvey, and even Alanis Morissette, but with her own distinctive timbre; whether adding punky yelps in ‘Last Chance County’, gentle emotional crooning for the earworm ‘One Flew East’ or when only two guitars accompany her for ‘Hey Lacy’, her vocal performance is consistently captivating.

It is also great to see Corin loosen up around the midway point for a bit of small-talk with the audience. The receptive crowd may have indeed played its part in allowing the whole band to relax and enjoy their performance. In the same week when Corin’s parent band, Sleater Kinney, release a single, announce a new album and tour details, it may be some time before Filthy Friends return. But let’s hope they do because you feel they are just starting to bloom, and have a lot more to offer.