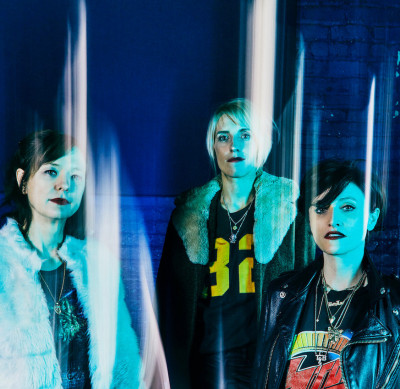 Ex Hex at The Hare & Hounds

Opening tonight are Nottingham’s Rattle, a hypnotic drum duo and currently one of the UK’s most unique and beguiling bands. They play face to face across a surprisingly minimal set-up, from which they tease out extraordinarily fluid and incantatory music. To see them live is always captivating and reveals the complex subtlety of their music. The natural expectations you might have of a drum duo are elegantly sidestepped as they avoid both rock ‘n’ roll battery and jazz abstraction. The rhythms are idiosyncratic and organic, only rarely rising to the sort of full-on clatter you might anticipate. They make your head swim more than your feet stomp. With relatively few elements they create a rich and melodic sound world, never supplementing the kit with random gizmos or chunks of scrap metal. Their songs, if we can say they have songs, continue to dissolve their own structures. Stretching out in length, tonight they play three in a half-hour set, the vocal elements paring down to repeating phrases and wordless vocalisations. Any fear the novelty might fade seems misplaced: I’ve seen them five or six times now and still fall to thinking telepathy or some other supernatural hoodoo is involved. Most likely it’s discipline and practice. They don’t seem to improvise on stage, they are totally locked in but it’s the opposite of machine like. It is, well, magical.

I can’t quite decide if Rattle are an odd or ideal choice for the support on this tour, their whole approach and appearance swerving the familiar language of rock ‘n’ roll in which Ex Hex positively revel. Still, it seems to work and the bands appear to adore one another – always a good sign to see the support in the crowd on the last night of a tour. Ex Hex are kinda disarmingly perfect. Hallucinatory in a different way. Early on in the set it feels like we’re watching projected old footage rather than a live band. I don’t mean that as a dig either. Ex Hex is undeniably a retro-informed project but they keep it in fine balance; they are not submerged by their influences or play acting someone else’s past. Where less interesting bands scoop up an armful of the most obvious signifiers and scatter them over their own efforts, Ex Hex grows outwards from deciding to write songs in a particular way. Time served DC musicians in more serious bands, they’re now having fun playing the kind of rock and pop they grew up with on the radio.

And they’re definitely having fun. The set splits evenly between their two albums erasing the production differences and showing them to be very much the work of the same band. On their recent second, It’s Real, they went all out on the stacked vocals and multi-tracked guitars for a highly polished sound that could fall flat live but, as I said at the start, they’re kinda perfect: note-perfect playing and glorious vocal harmonies that they make look effortless. There’s a particular joy to be had watching Mary Timony and Betsy Wright face each other to play guitar solos in rock-star poses with just the right blend of affection and mockery, sealed by their wonderful playing. Ex Hex are not taking the piss, but they know some of this stuff is silly.

The tunes tumble past at a pace, all short, sharp and shiny, each a twist and refinement of the last – catchy riffs and hooky choruses in bold, bright colours. There’s a few broken hearts and hurt feelings in there but Ex Hex aren’t really about the introspection, they’re about escape and the healing power of rock ‘n’ roll. About feeling young and carefree, even if it’s just for a chorus, even if you know you’re deluding yourself. By rights they should be playing to hysterical crowds of younger people than tonight but then perhaps it’s only nostalgia that makes it work. The one baffling omission from tonight’s set is the full tilt chug of ‘Waterfall’ otherwise it’s one gem after another until the wonderful ‘Cosmic Cave’ stretches out and morphs into a loose ‘Everywhere’ complete with foot-on-monitor solo trading and all. They encore with a couple of tunes off Rips: ‘Radio On’ and ‘Hot and Cold’. Because of course they have a song called ‘Radio On’ although they probably wouldn’t be so gauche as to actually cover ‘Roadrunner’. Did I mention they were kinda perfect? “Modern girls and modern rock & roll, Don’t feel so alone, got the radio on. . .”