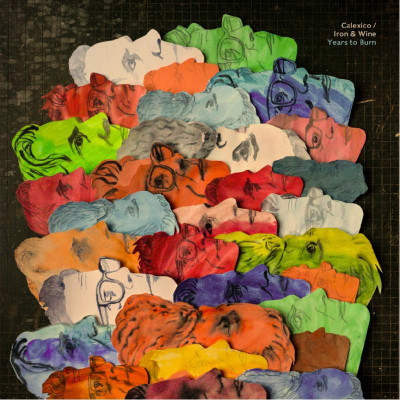 Years To Burn by Calexico and Iron & Wine

Here’s one that’s taken a good, long, while finding its way down the dusty road back to us. In 2005 Calexico and Iron & Wine first got together on In The Reins, a sublime combination of their respective strengths. For his part Sam Beam had been slowly expanding on the lo-fi acoustic whisper of his early Iron & Wine recordings with varied approaches to recording and additional instrumentation. Calexico meanwhile had begun lending their extraordinary facility for blending musical styles and textures to backing other artists. They proved a perfect match, lifting Sam’s songs on subtle wide screen arrangements that still centred his warm, soft voice. They brought out the best in one another. Already a fan of both I absolutely adored In The Reins. That they would, sooner rather than later, make more records together seemed both a sure, and unquestionably good, thing.

Joey Burns and Paul Niehaus turned up on the next Iron & Wine record but apparently everyone had their own roads to wander. Calexico drifted away from me to the point where I can’t even find my beloved copies of The Black Light and Hot Rail, left behind somewhere I don’t recall. As with any artist that keeps tweaking and stretching their sound there comes a time you no longer want to go along with them. For me and Iron & Wine it falls weirdly, and suddenly, between the magnificent ‘Walking Far From Home’ and the rest of Kiss Each Other Clean which left me cold. Nothing he’s done since has reached me, even the covers album with Ben Bridwell which I had high hopes for. Each time this happens I think “he needs to make another record with Calexico”. While I’ve not had much to do with any of them for a few years, when I saw Years To Burn come around the corner it was like running into an old friend. I was excited.

All of which is to say I may have raised myself some unrealistic expectations going in. On the first listen, a couple of minutes into ‘What Heaven’s Left’ I fear I’ve made a grave mistake, of course this is an impossible task, how could it match up? A cruel and unwelcome voice in the back of my brain hisses “The Eagles” but is mercifully silenced. The song tips towards a confused and meandering end section, clearly improvisatory and well intentioned but marked by wet sounding brass and indecision. ‘Midnight Sun’ is still quite loose but feels more organic. The wind is in the trees, it blows gently through pedal steel and piano, the song a return to comforting mumble and musical restraint. It was apparently written by Burns on the first night of the session before the others arrived. The album was made in just 5 days and there are times you wish they spent a little longer on developing the material. ‘Outside El Paso’ is a brief atmospheric interval, a desert jazz tumbleweed that serves it’s purpose here as a spacer but is the kind of thing Burns and Convertino wheeze out over breakfast or while tuning up.

While not as bad as its punning title might suggest ‘The Bitter Suite’ embodies this problem. A cut and shunt run through three unfinished sections of which each has its charms but all feel incomplete and unrelated to one another. First part ‘Pajaro’ features Spanish guitar and vocals from Jacob Valenzuela before he picks up his trumpet as it slides into ‘Evil Eye’ and improvises a bright solo over a rhythmic Calexico vamp. As it gains form and forward motion there’s a pleasing ‘do-do-do’ gang vocal but it goes nowhere and runs out of steam. The final section ‘Tennessee Train’ is an Iron & Wine song that probably deserved a more complete arrangement. Beam’s words and guitar are close up, while delicate percussion and distant accordion sway in back. It just sort of stops as the train rolls out of sight.

But that’s my bitching and whining done, for the most part Years To Burn is a treat, the best thing anyone involved has done for a few years. Often it’s so hushed and intimate it’s as if they’re playing in the front room and don’t want to wake anyone sleeping upstairs, the vocals hardly rising above a whisper but so effortlessly melodic you want to sing along right away. ‘Follow The Water’ is a warm breeze, a lazy stream. ‘Years To Burn’ is rueful, a heartfelt sigh, with some gorgeous sorrowful trumpet from Valenzuela. If sometimes they feel tentative ‘Father Mountain’ is a glorious roll, a great Beam song with the band in full cry, certain in steps as old as the hills. His warm, churchy voice underlines a knack he has for sanctifying emotion, for making the commonplace holy. A hazy biblical shadow falls across it in the sideways nod to gospel tune ‘In My Fathers House Are Many Mansions’ and like his best songs it has that timeless feel of having been around for years. It seems like it could easily go another chorus and ends a little abruptly but it’s a real charmer.

Likewise, closer ‘In Your Own Time’ marks a return to home and hearth, a communal sing a long with echoes of R.E.M’s ‘(Don’t Go Back To) Rockville’. It takes the long view, playing off life’s wilder adventures against the consolations of what I guess you’d call kinship “Come meet the family, get warm by the fire, someone will catch you if you want to fall”. Beam and Burns trade verses and their voices entwine like brothers, it’s easy to imagine it rolling on for twice as long around the fire. They’re out touring this record for a lot of this year, let’s hope someone has the sense to get them to make another one a lot sooner this time.