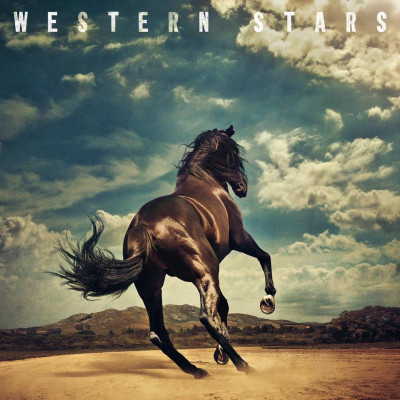 “I woke up this morning, just glad my boots were on”, so ends the final verse of the soaring title track of Springsteen’s nineteenth album Western Stars, and with it, a feeling that even after all these years, the man they call The Boss, still feels grateful for each day that he spends making music. It’s a theme which he raised during his year long Broadway stint, where he openly admitted to being a fake, where he re-enacts this working class car-mechanic hero every night on stage. He even admits to not even being able to drive until his late twenties.

Here on Western Stars he unravels that feeling that one gets towards the latter days of their career, only instead of searching for answers, Springsteen indulges in the pathos presented by the circumstances of the characters. Much like the protagonist of the title track, whose story of being shot by John Wayne in one of his movies, has kept him within the spotlight (albeit one of fallen angels in bars as they line up another shot), Springsteen embodies characters who sit well with his feeling of being this so-called fake. The irony being that by doing so, he once again proves himself to be the embodiment of that working class rock-and-roll American hero.

A decade in the making, in between the Wrecking Ball album and tour, the High Hopes odds and sods album, the repackaged box-sets for previous albums Darkness On The Edge Of Town and The River (and yet another world tour), and then the minor inconvenience of that stint on Broadway, the album finally arrived on the back of three quickly released video promos. Beginning with the gorgeous ‘Hello Sunshine‘, then followed quickly by the Roy Orbison aping ‘There Goes My Miracle‘, and the more traditional sounding ‘Tucson Train‘, it was immediately obvious that Western Stars was not going to be the usual Springsteen album. Described as a treasure box influenced by the sounds of the West Coast such as Glen Campbell, the three releases presented a stripped-down Bruce, but unlike the desolateness of Nebraska or Ghost of Tom Joad, this time lavished with soaring orchestral strings. Here was his country album, always threatened, finally realised.

Except it’s a lot more than country. The cars may have been replaced by horses, and the garb now including Stetsons, but underneath the lush production (and it really is a superb sounding record), is that same old Bruce inhabiting the lost characters of his America. The only difference this time being the worker from the chicken factory of ‘Atlantic City‘ has been replaced by the fading movie star, or as in ‘Drive Fast (The Stuntman)‘, an old action man. These are characters of Bruce’s childhood, where he would have no doubt shot pretend guns at the screen as the black-and-white cowboys brawled it out in a saloon on the edge of town. That he lives on a ranch surrounded by horses (with his daughter being rather adept at horse-riding herself), allows him to embody the gnarled country man at the end of the road. Success may have provided him with everything he has, but crippled by depression (and see ‘Hello Sunshine’ for a heart-breaking rendition of what that does to you), that human aspect that so fills his career-defining albums, takes on a much more emotional resonance. In fact, you could argue that this is his most personal album since Tunnel Of Love, only this time, instead of relationships falling apart, he is exploring those relationships that stay together through thick and thin. Let’s all meet at ‘Sleepy Joe’s Cafe’, he suggests, and you’re pretty much inclined to make it a date.

The most surprising aspect of this album is undoubtedly the strings, and it really is the moment where Springsteen meets John Ford. Sweeping moments elevate the pathos and sometime bleakness, as he delivers probably the best vocal performances of his career. Gone are the barked vocals of ‘Badlands‘, or the muttered stories of Tom Joad, and in its place is a warm, rich sound which demonstrates a side of Bruce which we never knew existed. That he is delivering this at 70 years of age is all the more remarkable, and in doing so makes Western Stars an absolute delight to listen to.

It’s perhaps the lyrics that shine through though, and where we usually get storyteller Bruce on his more reflective albums, here we get a beautifully poetic delivery that never uses more words than it means to. Take the stark, simple lyrics of say, ‘Thunder Road‘, and add in those 50 years down the road, and you find yourself arriving at the ‘Moonlight Motel‘ where he pulls a bottle of Jack from a paper bag, and lines up shots. One for you, and one for me. As you down them, on this final song, which is so ultimately powerful that if it was the last song he ever presented on record, then it would be enough, you cant help feeling that you have heard a rather remarkable album. It’s no great shakes to say that this is Springsteen’s best and most satisfying work since Nebraska, and ultimately may end up being a true defining album within his whole career. A wonderful album which shows there is still life in the old Boss yet. Not that we ever doubted.