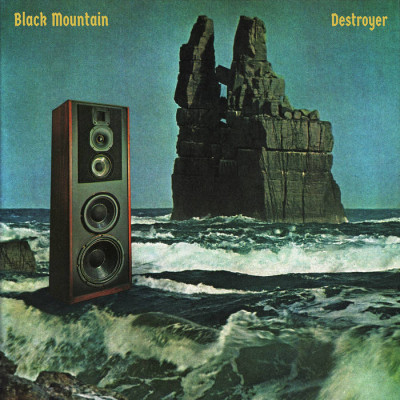 Black Mountain have always ploughed a deep burrow into classic 1970’s rock genres: Prog, Psych, Krautrock and the classic pioneers Led Zeppelin and Black Sabbath across their four albums. They have skilfully managed to form it into their own unique song-writing style and sound, while successfully, avoiding making albums that follow a formula or any kind of repetitiveness. Previous album, 2016’s IV widened their sound for a fully realised epic grandeur they have always promised, which in the process created arguably their finest album to date.

Prior to the making of fifth album, Destroyer (homage to the Dodge Destroyer vehicle rather than the 1976 Kiss album) have seen some changes in the Black Mountain camp as the 2019 version sees Stephen Mcbean take further control to steer the vessel. Both Joshua Wells and Amber Webber have sadly left. Instead, we see the arrival of Adam Bulgasem and Rachael Fannon, whose slightly harder vocal stylings are fittingly suited to this louder, rockier direction. Also involved are Kliph Scurlock, Kid millions, and John Congleton, while Arjan Miranda has re-joined. Long-time member Jeremy Schmidt once again applies a vast range of heavy synth usage alongside Mcbean’s distinctive song-writing style, but overall, on Destroyer the new line-up charge at you with an inner louder, fuzzier, rock-harder directness.

But, personnel shuffle aside, the momentum continues as Mcbean and his cohorts still chuck in a truckload of ideas and textures into the melting pot. On ‘High Rise’ they let rip for a thrilling ride. A head swirling mix of many elements at play – rip shredding guitar, cascading synths, heavy breathing to vocal wailing, driving tempo – is symbolic of Black Mountain’s ambitious song-writing scope. Another highlight, ‘Horns Arising’, has sweeping synths, lysergic vocoder vocal stylings, folkie guitar pickings to make this the closet ally to the cosmic grandeur of IV. But, it still has a harder, fuzzier, rockier interior.

So, while not entirely leaving the cosmos completely, this rockier direction however, is clearly heard on the road trip song opener ‘Future Shade’, the glorious Marc Bolan’s T-Rex sexual swagger of ‘Boogie Lover’, and in ‘License To Drive’ they delve into a NWOBHM inspired riffage, raising the horns as they race through galaxies on Harley Davidson rockets. The only disappointment is the rave intro esque ‘Closer To The Edge’ which leaves an album filler aftertaste.

It was always going to be an enormous task to follow the fabulous heights of IV, and it still stands as their best long-player to date, but at times they do come close. As the new look Mcbean led Black Mountain still sustains a successful continuation of their intriguing musical journey, as fifth album Destroyer is ultimately, another very good addition to the B.M. canon. And, most probably will also be one of the better rock albums released this year.