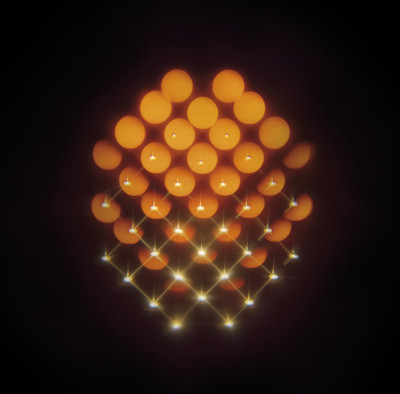 Syntheosis by Waste Of Space Orchestra

In 1975, Alejandro Jodorowsky put together a cast of musical heavyweights including Pink Floyd, Magma, and Karlheinz Stockhausen with plans to record the soundtrack for his doomed film project – Dune. Syntheosis feels like the soundtrack to that film. A film that never was, yet, somehow, exists within the psyche of humanity.

It could be the drifting drones of ‘The Universal Eye’ or the tribal drums and chanting, swept up in swirling electronics, on ‘Infinite Gate Opening’ that lend this album a cinematic feel. Or, it could well be that with the combined innovative forces of Oranssi Pazuzu and Dark Buddha Rising coming together to form Waste of Space Orchestra, something grander was necessary. Something more than simple sonic creation. A narrative was needed. An over-arching tale streaked through the spine of this, unexpectedly fun, record.

And the story is visible from the off: ‘Void Monolith’ begins with tiny whimpers of sound emerging from a burgeoning darkness. The silence of the void is slowly swamped with scattered sparks which loom and then roar into space. Silence engulfed by a rising construction. Heralding life like some sort of interplanetary rock titans. Rousing guitar licks lead a march out across the vast unknown. Chunks of bass debris smash aside any obstructions.

Pugilistic drums then deftly shift into free rolling fills for the second track – ‘The Shamanic Vision’. In this the chronicle continues with stoked mysticism and retched vocals that seem to gurgle up this morning’s breakfast of primordial soup. The message imparted must have contained some bad news because the musicians then absolutely gun it. Galloping blast beats and weeping synths combine to create something akin to skeletal horses surging away from oblivion. It is not long until that guttural crooner returns with his predictions of misgivings.

Whilst ‘Vacuum Head’ might sound like drilling through the planet’s core whilst being chased by a swarm of irate wasps, it’s not all flat-out fury. The fourth track slows things right down with a groovier sway that let the musicians and audience alike gather both their breaths and their thoughts. If this is a ‘Journey to the Centre of Mass’ then it’s in a luxury elevator resplendent with canapés and air conditioning. Or at least it is for the first half. After that, things start to go a little awry. Walls warp with heat. Directions become confused. Time seems to shift simultaneously faster and slower. Fantods begin to howl as the repetition becomes more sinister. They lock into the sort of gnarled furrow that Gnod use to batter audiences senseless with, although this is perhaps marginally more comforting. That is, until the lift’s walls peel away and the inhabitants are faced with the reality that their lift has broken loose of its track and they are, in fact, being catapulted across an unknown expanse. All aboard a runaway elevator plunging through the very consciousness of existence, picking up speed and jettisoning its structural integrity before it all fades out into twinkling stardust.

For the most part, however, Syntheosis is savage psych delivered with heavy doses of histrionics. ‘Seeker’s Reflection’ is more structured. Its punchy drums, more composed. Cooing electronics flirt with melody. They sashay about with a dipped shoulder and gyrating hips. This has its tongue engulfed in its cheek. The whole album is chock-full of fun as it rampages from one over-egged, over-clocked, and over-the-damn-top composition to the next. It takes the theatricality of operatic performance and threads it through with an explosive and wild extreme metal performance. Imagine Darkthrone scoring Don Giovanni and you’re getting close.

As with every narrative, this one has a crescendo. The final track delivering on its length with a steamroller of gargantuan riffs that gouge craters out of planets, flatten galaxies, and reverse the time-space continuum. It has me reaching for yet another cinematic analogy (this one sounds like Sleep if they had been enlisted to soundtrack Battlestar Galactica). But, somewhere, buried amongst all of these various comparisons and reference points – Sleep, Battlestar Galactica, Gnod, Darkthrone, and Don Giovanni – lies the film that Jodorowsky wanted to make. I can only thank Waste of Space Orchestra for gifting us that.