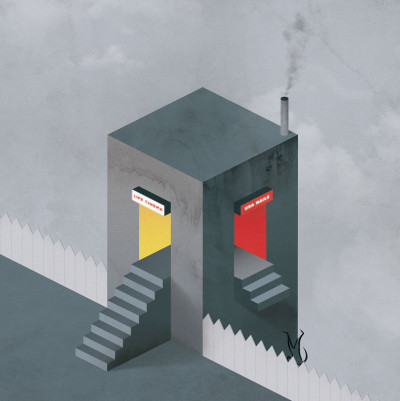 Gritty London noiseniks return with a tightly wound fourth album that finds them as anxious and irritable as ever. Life Cinema is a hectic, urban, record. Full of clipped repetition and blank phrases. It has the claustrophobia of cities, the perverse loneliness in crowds. Locked step mental overload, constant ill temper. The gridlock migraine and the deep rumble of trains below the pavement. USA Nails have tightened their already impressive attack with an unsentimental concision here. Life Cinema is colder, more vicious and efficient. The songs are short and sharp, the drums are relentless, the pared down lyrics loop in short phrases, the guitars too. Noise rock textures shorn of classic rock indulgences with caustic post punk rigour. Light and laughter are all but shut out, there are no ballads, no deviation from its machine logic. Life Cinema is an existential nightmare positioning us as arch consumers of our own helpless alienation. ‘It’s Ordinary’ offers a cold eyed portrait of “where the suburbs meet the city, there’s tradition and nostalgia, and nostalgia and tradition”. The lack of affect in the vocal makes no judgment but the implication is clear. Everything is garbage.

On their last album, Shame Spiral, USA Nails curtly dismissed Kraftwerk as a bunch of liars for suggesting we were robots. Perhaps it was only loud and hurt denial because Life Cinema seems to coldly embrace the idea of the man machine from its very opening line “I am a human traffic light, a talking book”. The cover pictures the life cinema as a concrete block, a factory we enter, spectators to our own mediated experience, eventually leaving only to die. The films it shows are episodic, derivative and opaque. It’s stories lack resolution and we watch appalled as evil goes unpunished and the good suffer to no reward. The traffic lights dance colourfully through the same circle over and over forever. The floors are sticky with human misery and the blood of the innocent. So it goes.

Several times I’m reminded of Idles, who are fans (USA Nails recently played an aftershow party for them),but despite the odd sonic similarities the bands share, they’re spiritual opposites. USA Nails make Idles sound like U2. Idles are ambitious, anthemic and communal which is why they connect so well to a bigger audience. This album’s penultimate track is called ‘A Sense Of Self Will Always Limit You’. As much as it would warm my cold heart to see them reach that level of success the sullen truths and bleak worldview of USA Nails offers less potential for uplifting crowd sing a longs. Idles offer hope, offer joy as resistance, but down in the battered seats of the life cinema joy is a fleeting illusion, resistance futile. If nothing else, there’s affirmation. Sometimes that’s enough. Life Cinema is brilliantly brutal. Tune in and turn off.