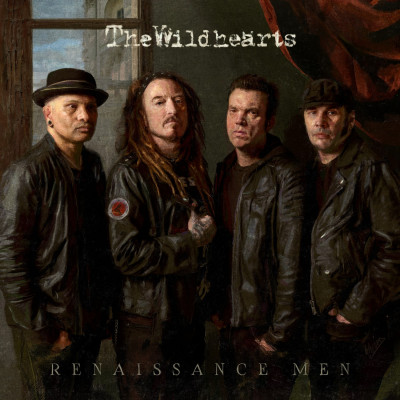 Renaissance Men by The Wildhearts

It’s been ten long years since Wildhearts fans last got some new music to get excited about. Sure, the band members have been involved with many different projects and albums in that time, but the occasional reunions and anniversary tours had many loyal followers hoping that they may see Ginger, Danny, CJ and Rich coming together to write some new material, and then the news came last year, on the back of the triumphant benefit shows for former bassist Scott Sorry, that plans had been made, and a new album would be coming. Finally, with the release of Renaissance Men it’s time for the results of those writing and recording sessions to be released, and it seems that that long wait has been rewarded.

Lead single and album opener ‘Dislocated’ is classic Wildhearts. It’s the longest track on the album at just under six minutes, but has everything you would expect and more from the quartet. Huge riffs, memorable hooks and a chorus of such anthemic quality, that it’s already bound to be a surefire winner when the band start touring the record. Another song made for the live setting is ‘Let ‘Em Go’, a hearty song with an almost Dropkick Murphys feel in the sense that this is a pure beers in the air singalong that with it being released in advance of the album, should be another noisy addition to the set. The title track is a little calmer, but is also a cathartic middle finger to anyone that thought the band (and band members) were finished. Three very different songs to start the album, and all instantly recognisable as Wildhearts tunes. “Some thought that we were through, some prayed we were too…you can’t keep a good band down”

The album takes a turn toward a heavier sound for the next few tracks, but now matter how angry and chaotic things get, the band somehow never stray too far away from their tried and tested heavy-but-singable formula. ‘Diagnosis’ is an angry but deliciously melodic diatribe looking at mental health, the stigmas attached to it, and the difficulties people face in getting help, even in today’s more forward thinking climate. ‘My Kind Of Movie’ is fast and heavy but again features infectious hooks this time reminiscent of old B – side ‘You Got To Get Through…’. The last couple of tracks err toward the more bizarre side of the Wildhearts repertoire. Both ‘My Side Of The Bed’ and ‘Pilo Erection’ throw something else into the mix, a little less immediate than most of the preceding tracks every bit as good once you get your head round them after a couple of listens. These are more akin to frontman Ginger’s solo output, that does like to throw a few little twists and turns in there.

And just like that it’s over. Was it worth the decade long wait, damn right it was. The boys are back, and more pissed off, more melodic and in as good form as ever. Their back catalogue is so strong it’s difficult to really find a place where this sits in amongst all their other releases, but it more than holds its own against their finest work. There are maybe four or five tracks that you can see being part of their live shows for a long time, and others that may not immediately grab you, but you know at some point they will be your favourite tracks on the album, that’s how Wildhearts albums work. It’s great to see this line up actually record a full album together, and on this form, hopefully it won’t be another ten years before we hear more.