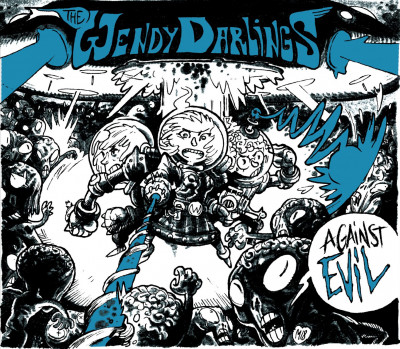 The Wendy Darlings are a French indie pop trio from Clermont-Ferrand with, I think it’s fair to say, a strong anglophile streak, but we’ll come back to that. It’s a full ten years now since they first made ripples on this side of the channel with their ‘Enormous Pop’ and five since their last album The Insufferable Fatigues of Idleness. That’s basically an eternity in indie pop years but fittingly enough they don’t appear to have grown up at all. They return still fizzing with youthful glee, the wide eyed centre of a world of adventure and possibility. One in which they might not only fight, but conquer the massed foot soldiers of evil, handmade laser guns blasting out an endearingly chaotic old form of punk pop.

‘Always Late’ kicks off with some slashing guitar before the rhythm section tumbles in and Suzy’s voice swings almost immediately out of its comfort zone and wildly off tune. It’s like a deliberate statement of lo-fi ineptitude and belief, an article of faith. ‘Leave This Town’ zips defiantly by on ooh-ooh backing vocals and handclaps. Peak perkiness is reached early on with ‘Fun in The Summer’ which channels The Barracudas and The Groove Farm into a barefoot beach party.

Their clearest influences lies in what we might lazily call C86. A curious mid-decade watershed that burned out quickly but has enjoyed a weirdly resonant afterlife. A DIY moment noted for a ‘shambling’ sound that was the result of bands recording cheaply while still learning to play their instruments it was mostly about 7″ singles. The Wendy Darlings most recall The Flatmates who never even finished an album despite running the Subway label. Even The Shop Assistants, the most effortlessly perfect of these bands, only managed the one and much though I love it, it tails off sharply in the final third.

How, or even why, a French band of twelve years standing are making records like this is mysterious to me I confess but they make a decent job of it. Walking a fine line between competence and under rehearsed spontaneity they keep the vitality and sense of playfulness needed to carry it off. Perhaps they’ve indulged the idleness of their previous album’s title, or more likely the band is a precious escape from everyday drudgery, but they’ve not spent five years on this record and it’s all the better for it. They shimmy and rumble with bright eyed, scrub cheeked enthusiasm. Like the famous five as beatniks, deciding to put down their Gauloises and take up the fight against evil rather than being transfixed by it. You can picture them finger clickin’ and noddin’ along to ‘Tongue Tied’ and shakin’ a tail feather to the wild organ on ‘Davy Jones’. Elsewhere the steady strum of ‘Easy Come, Easy Go’ is eventually pierced by a delicious wail of feedback and the infectious groove of ‘Dear Mr Twist’ gets pleasingly ramshackle and noisy. Which is nice.

Before we go, can we just take a moment to reflect on what a perfect name The Wendy Darlings is for a band of this inclination. Twee but with a pleasing rhythm in its syllables even before we come to the implications of the literary reference. Wendy Darling is Wendy from Peter Pan. A girl in love with a boy who refuses to grow up and only wants her to mother him. As a self reflective critique of their own genre that’s pretty on the nose but perhaps I’m reading too much into it. Despite its international appeal the children in Peter Pan are still quintessentially English. Suzy sings not in the kind of French accented English that makes us all swoon for Laetitia Sadier but in a vague and authentically blank Thames valley/estuary accent.

It’s not all winsome Englishness though, ‘Doppelgangerin’ finds her barking in German over wailing theremin and the giddy ‘Don’t Mind’ gives you psychic whiplash with a break down of bracing Gallic filth that’d make little Tinkerbell’s ears burn. Most intriguingly of all the album comes on CD or as a download with two bonus covers of 60’s French cult classics – ‘Elucubrations’ and ‘Pourquoi Pas Moi’ (originally by Antoine and Stella respectively). They open a secret door to a different but complimentary set of musical roots that I can’t help wishing they would explore further. ‘Pourquoi Pas Moi’ doubles down on the eternal childhood thing, a Yé-yé parody recorded when Stella was only 12 (She later went on to sing with Parisian proggers Magma). Both are excellent, sharply arranged and lovingly performed, carried on some great organ and blessed with glorious French vocals. I don’t know what she’s singing but it sure sounds better in French. Frankly, I don’t think they are going to conquer evil, but if you like a bit of indie pop, this is a lot of fun.