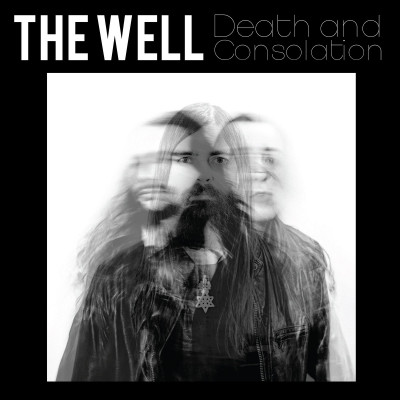 Death and Consolation by The Well

Austin Texans power trio The Well turn to a darker, personal ambience for their third album, as vocalist/guitarist Ian Graham explains “2018 was a strange, dark year. A lot of change going on in my life, there was a lot of depression and coming out of it over the last year. I wanted to call this Death and Consolation, because in life that’s a constant.” This could be mistaken for a less-rockier outcome, but the exact opposite is indeed which emerges from the speakers. The press release states Ian down tuned to a C standard tuning, for a heavier result, and while that may be the reason, the real cause for, er…if this is the appropriate word, celebration, is Death and Consolation hums and thrums in a consistent direct and enjoyably powerful manner. To put it simply and bluntly, this is their most cohesive best set of songs to date.

Let’s begin with the most striking and immediate observance, and that is how the production is gloriously punchy as the band bounces with a striking purpose, while the fuzz rumbles and fizzles. Layers of enveloping afore-mentioned fuzz transpose into a rollicking album opener ‘Sabbah’ as it comes at a you like Black Rebel Motorcycle covering Velvet Underground. This is then followed by ‘Raven’ which imagines Primal Scream at their most heroin drenched heaviest doing a Stooges impersonation. The piano tinkling idea three quarters of the way through recalls The Stooges ‘I Wanna Be Your Dog’ works a treat, giving the song an extra beating pulse.

Then, there are also the riffs Ian conjures; simple, unflashy, but effective big thick rollers. And these work unexpectedly to equal effect on the more brooding, downbeat ‘Death Song’ and the chugging ‘Cup of Peace’. None of the eight songs are overplayed, all stripped to their concise bare-essentials: hefty riffs, big steady sounding rhythms, and thick rumbling bass. And let’s not forget the earworm melodies of Ian’s lead vocals and Lisa Alley’s subtle floating background harmonies.

Also in the press release, Ian states post punk were key influences, so one assumes Joy Division and early The Cure were the main dips into the inspirational creative pool. The eerie sounding ‘Freedom Above’ probably best captures the downbeat grime beauty of these bands. But, the album ends with ‘Endless Night’ and another shimmering riff, a sturdy, swaggering beat and the sound of bells chiming alongside the distortion drenched guitar finale by Ian, further showcases how what may be seen as simple ideas can be effectively applied to aid a song for maximum, dramatic, rock n roll punk effect.

Death and Consolation was born out of a lot of painful change, but its darker Gothic edge and heavier tone using the directness of effective power riffage led song-writing permeates successfully throughout, resulting in a strange juxtaposition of this being a very enjoyable listen.