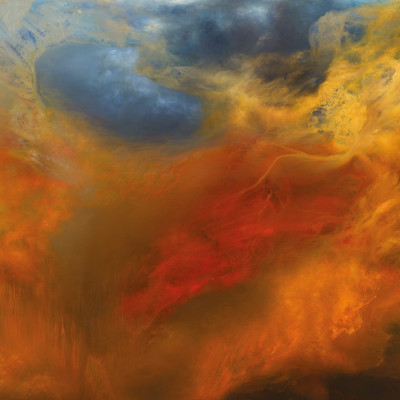 Sunn O))) have long been known for their extreme metal influences since well before Monoliths And Dimensions first flattened the coffee tables of Guardian readers. The painstakingly protracted black metal riffing on Black One was a pretty hefty hint, as was their split with Ulver, not to mention that their regular collaborator, Attilla Csihar, was only in fucking Mayhem. That aside, we get further evidence of these tendencies on their latest outing – Life Metal. The title itself is a reference to an insult the members of Entombed received when they decided to sign to Columbia Records and the whinnying horses kicking off the opening track – ‘Between Sleipnir’s Breath’ – is directly lifted from Bathory’s iconic record – Blood Fire Death.

With these pointers providing a backdrop to the new record it might then come as a surprise to hear that, whilst still monumentally heavy, Life Metal positively soars. It feels like it’s continuing a trajectory first broached in the closer of the aforementioned Monoliths And Dimensions, ‘Alice’. Here the throaty swung chords seem to ascend rather than descend. They rip through the sky like clouds aflame. Following the equine charge comes the sole appearance of vocals on the record. Previous collaborator Hildur Guðnadóttir’s haunting whisper tolls separately from the irresistible waves of guitar and bass. Having her voice disembodied and set apart from the amplified instruments creates the impression that her gentle chants are being hunted by these menacing and shifting chords. It seems like a final remaining stronghold is being besieged by a sonic battering ram. Does she hold out? Or escape astride a hoofed steed?

Where previous releases have set about carving up earth and unsettling tectonic plates, these four tracks seem to cleave through the great beyond that stretches far above us. Bothering the mesosphere and assaulting the heavens. That is not to say that this is a highfaluting experience – the core duo of Stephen O’Malley and Greg Anderson have always had their tongues buried deep within cheeks hidden behind heavy cowls – it’s just as physical as before and alongside the muscular drones comes a sense of tangibility (perhaps this helps to explain the appeal of acquiring the weighty 180g vinyl cuts). It’s this awareness of corporeality that, inevitably, brings us back to dirt, soil, and nature. Back to Earth. Both that beneath our toes and the drone-fathers who kicked this whole thing off. If Sunn O))) were a drug, they’d be magic mushrooms. The psilocybin first realigning mind with body and then syncing with nature before triggering a fit of booming giggles upon the realisation of quite how ridiculous this whole construct we’ve named “Humanity” is.

That Sunn O))) can keep releasing albums that are this fantastically captivating is practically absurd. By all rights their music ought to feel like rank repetition. Like it is kicking up old, worn, ground. And yet, instead, this feels full of vitality. It’s fresh and demanding of your attention. It engulfs thoughts and calms erratic synapses. This is music that relishes double think. It requests focus but then lays out plentiful space for minds to drift, to wonder. Tiny glinting tingles cut through the squall. Gems of light. A reflection off moonlit stone. The two axemen synchronise and then allow themselves to stray into gaps that the other has created. It’s the summoning of opportunity. A ritual whose end result is the act itself. If you perform it, they will come.

There is hope streaked throughout this record. From the title, to the artwork (fantastical paintings from Samantha Keely Smith that seem to place Turner’s swirling clouds within Beksinki’s nightmarish plateaus), to the enthralling music. This might sound like the gurgling of a planet’s molten core but it has been recorded as if during the initial formation of that planet. It’s the optimism of world-building. Just play this whilst watching the creation of the universe scene from Terrence Malick’s Tree of Life to get what I mean. In part, I think that this is due to the scant production under Steve Albini’s watch. O’Malley and Anderson have both spoken about how this was essentially recorded live, with barely any overdubs and that the consequent, resulting commitment to texture and tone has resulted in a grainy and palpable sonic palette that truly evokes a combined partnership between terra firma and a vast ethereal plane. Or, as Luke Turner recently described in his review for The Quietus, “music that has at its core a deep eroticism”. For what are we if not strange creatures battling the humdrum together in vain hope of understanding the epic? That Sunn O))) have a more reflective follow up – Pyroclasts – already in the works is cause for great jubilation.