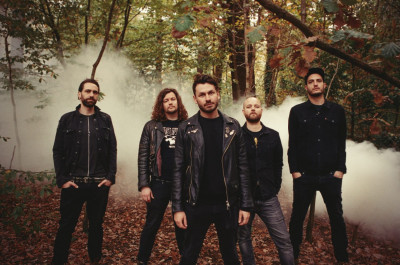 When I was about twelve I was into the mainstream metal of the time - I asked my nan to get me a Machine Head album for Christmas but she accidentally got me Machine Head by Deep Purple instead. I ended up listening to it nonstop and soon afterwards I picked up a guitar for the first time…

Hot on the tails of their first EP comes the debut album Woodland Rites by South London’s Green Lung on the Kozmik Artifactz label. They come bouncing through the forested foliage with filled cauldrons of spellbinding chunky riffs, Ozzy tinged crooning, and more hooks than a butcher shop. Superbly fusing the rich qualities of early 1970’s psych, classic rock and proto-metal, NWOBHM’s direct heavy tunage, and the freshening reboot of these influences by modern bands like Uncle Acid and the Deadbeats and Ruby the Hatchet. So, as of writing, while they are currently on a European tour with Puppy it seemed like good timing for Echoes and Dust to help band members Scott Black (guitar) and Tom Templar (vocals) fill their journeying time with a batch of questions to provide further insight into their formation, ‘folklore’ interests, and the allure of seventies rock.

E&D: Can you give us a brief history of the band? How you all met, etc?

Scott: Andrew (bass), Matt (drums) and John (organ) all played together in an instrumental doom/post-rock band called Deadbox Radio, and I was playing bass in a stoner band called Oak. I met Andrew at Desertfest in London and over a few drinks at the Black Heart we hatched a plan for a side project. The side project very quickly became the main project…

Tom: I’d been in an extremely brutal doom band in the Electric Wizard/Moss mould as a kid but hadn’t dabbled in the scene for a while. When I joined the band after an audition, I quickly realised that what Scott was writing was a lot more melodic and nuanced then anything I’d done before, so I was interested in challenging myself to actually sing rather than scream. Having all played in projects at the extreme fringes of metal, we were keen to go back to the fundamental things that got us into this kind of music in the first place – stadium sized riffs, catchy hooks, guitar solos. We essentially wanted to go back to the source and make a vintage metal record with modern gear.

E&D: How did you all individually, get inspired to pick up and learn a musical instrument?

Scott: When I was about twelve I was into the mainstream metal of the time – I asked my nan to get me a Machine Head album for Christmas, but she accidentally got me Machine Head by Deep Purple instead. I ended up listening to it nonstop and soon afterwards I picked up a guitar for the first time…

Tom: I was never very competent instrumentally, but I was completely obsessed with music from a young age. In my teens, I wrote about music more than played it – I wanted to be a music journalist so I was always making zines and writing for websites and magazines. It was only when I was about 18 that I played my first show and sang in public for the first time. I’m completely self-taught and being in Green Lung has really pushed me to improve and define my style and technique.

E&D: If you were going to do a mix tape (showing my age) or a Spotify playlist of the band’s influences, who would be on there?

Tom: I think the band van playlist might surprise people – we love all kinds of music from hip-hop and hardcore to ambient and experimental. But in terms of the influences we’ve soaked up into our sound, we’ve tried to go back to the source and study the tones and song structures of the bands that laid the template for what would become metal: Black Sabbath, Judas Priest, Blue Cheer, Pentagram, Queen, Wishbone Ash, King Crimson, Black Widow, Comus and a whole bunch of ever more obscure heavy psych and progressive rock bands from the early Seventies!

Scott: In terms of current bands that inspire us, we look up to the likes of Mastodon, Power Trip, Turnstile, Tribulation… any bands that started out as ‘genre music’ but managed to outgrow and redefine that style into something fresh and new.

E&D: How did the recording of debut album Woodland Rites take shape?

Scott: We worked again with Wayne Adams from Bear Bites Horse Studios who recorded our first EP. Wayne comes from a punk/electronica/noise background but really understands what we’re trying to do in resurrecting classic sounds and injecting them with modern heaviness and clarity. He’s been essential in offering a critical eye and knowing exactly the right amps and settings to use. When we recorded the album I had Tony Iommi’s exact tone in one channel and Brian May’s exact tone in the other!

E&D: Did the process of the album differ to the making of your first EP?

Scott: We had more time, but it was very much the same no frills process – we nailed everything in five days, which was a feat of endurance but worth it in the focus and drive it gave to the recordings.

E&D: Can you tell us more about the song-writing process in the band?

Tom: For the album, Scott would sent around an instrumental demo and we’d all listen to it incessantly, come up with our parts and get it together pretty quickly in the practice room. Scott wrote all the music on the album, I wrote all the vocal melodies and lyrics. It’s a very streamlined process – my experience in stoner/doom bands has always been lots of jamming and not a lot of discipline, but Scott writes songs and drills us like he’s Greg Ginn.

E&D: Without a lyrics sheet, many of the songs on the album sound like they have an agrarian theme. Can you tell us more about this?

Tom: It’s not really an agrarian theme as such, more an interest in folklore, nature, land and so on. There’s this strange, eccentric stream of British culture that never goes away, no matter how corporate or capitalist the world gets – a stream that lots of disparate musicians, writers and filmmakers swim in, from our obvious musical touchpoints like Sabbath and Comus to folk horror films like The Wicker Man, from maypoles and other half-forgotten folk rituals to free festivals and the weird and ancient sites we have scattered across our islands. In a time of unrest and rising nationalism, we want to remind people that to be British doesn’t necessarily mean a ham-faced Tory in a gastropub, it can also mean a bunch of radical people from disparate cultures getting off their faces in the woods on hallucinogens and dancing naked around a megalith.

E&D: What has the response to the album been like so far?

Scott: It’s been staggering. With Free the Witch we had a great response from the stoner/doom community, but if you told us that we’d end up getting track of the week in the Guardian (for ‘Call of the Coven’) and played on Radio 1 we would never have believed you. We don’t have a traditional record deal, a manager or a marketing team – we do everything ourselves, from commissioning art and design to driving ourselves around on tour – so to have reached so many people though completely DIY methods has been really satisfying.

E&D: Can you tell us more about the album’s artwork?

Tom: A few years ago I saw a poster for a re-release of The Wicker Man by an artist called Richard Wells, with this amazing woodcut style that perfectly fit the sense of eccentric British weirdness we wanted to portray with the album. Richard isn’t a metal fan and had never designed an album cover before, but he understands folk horror and occulture more than any other artist I’ve worked with and he had a brilliant idea to rework a medieval woodcut of a witches sabbath for the cover. I think his illustration is a huge part of the album’s success. It’s just perfect.

E&D: The debut album has just been released and a tour supporting Puppy is underway plus a few other shows, including an album launch gig at the Our Black Heart pub in London. Are there any more plans and/or band ambitions for the future?

Tom: We’re halfway through the Puppy tour as we write, and the tour has been a blast so far. It’s definitely inspired us to take our live show up a level, and the response to the new material has been brilliant, it never gets old hearing a room sing your songs back at you. We’re genuinely huge fans of Puppy – I was going to buy tickets to the Underworld show before I heard we’d been offered it! – so it’s a massive honour to go out and warm up the crowd for them every night.

Scott: We’ve got some big plans for the launch show, including some special guests, a cover and some ambitious set design. After that we’re off to play some shows in Europe for the first time with our label mates Deathbell, and a few summer festivals. We’re hoping to make it out to more European festivals in the near future.

E&D: You are signed to Kozmik Artifactz label, who have quite a fine roster of bands, how did you become involved with them?

Scott: After our EP Free the Witch was released a few labels got in touch enquiring about a debut album. Kai from Kozmik has a track record for producing beautiful vinyl editions for bands we love like Church of the Cosmic Skull and Ruby the Hatchet, so we ended up signing with him, and we’re very glad we did as he’s been a total pro. The first pressing sold out on preorder and a second pressing (on red and white vinyl) should drop in May…

E&D: You are currently on tour, how do you all intend to pass the time while travelling?

Tom: We have a copy of a book called A Guide to Occult Britain in the van, so we’re fitting in some heavy metal tourism. Tonight we play Glasgow so the plan is obviously to stop off at the Glasgow Necropolis… other than that we’re lying around in the sun and trying to rest after overdoing it consistently every night.

E&D: Once again, thanks for answering the above questions for Echoes and Dust. Hope to see you at the album launch at the Our Black Heart pub.

Tom: Thanks and hopefully see you down the front!

Scott: Cheers! You may be surprised by that cover…