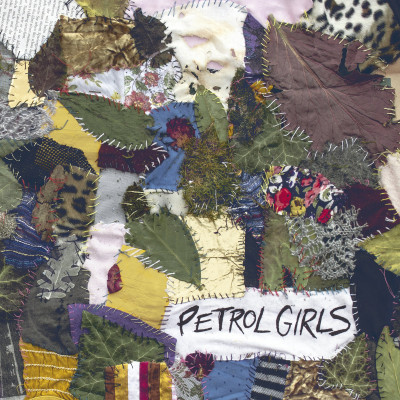 Petrol Girls‘ earlier releases and blistering live shows have established them as flag bearers for raging feminist post hardcore. What we all want from Petrol Girls is another jolt of righteous anger to match ‘Touch Me Again’. Such is the eternal unexamined hope of the music lover, that a band will repeat the thing that made us love them. It’s not actually what we want though, is it? Bands that repeat themselves are boring. Petrol Girls know this and look for ways to grow and change on their second album. Cut & Stitch comes with an instructive introduction from vocalist Ren Aldridge about the ideas involved in its creation, “It’s the most experimental record we’ve made so far, both musically and lyrically. . . being vulnerable is just as radical as being angry – it certainly scares me a lot more. Rage on its own isn’t sustainable. We hope this is a more honest and human record.”

It opens with a spoken meditation on sound over drones and field recordings that soon runs into ‘The Sound’ a sinew straining rager of the kind you expect from them in which the liberating roar of the band and the power of ideas entwine as a positive unseen force. “This is the sound, It moves in our bodies, It passes through time, Brings what came before us”. They’ve not thrown the baby out with the bathwater, the tough, taut core of their sound still fills out most of the album’s run time. It’s just pushed and pulled in various directions, reimagined and reworked with a more varied patchwork of textures.

Introspective spoken interludes and odd sound scraps litter the record. ‘Interlude (Looming)’ is another noise cloud and poem intro for ‘Monstrous’. A lacerating dance of self image Aldridge largely delivers in a self mocking sing-song before screaming “I Can’t give you any more, I can’t give you what you want” as the song is cut off by a great contortion of noise. ‘No Love For A Nation’ rails against the epidemic of hateful jingoism we’re all currently enduring, nods to Tom Waits’ ‘Hoist That Rag’ by lifting the title, and ends with them playing the national anthem on kazoos in less than fully respectful fashion. By contrast ‘Skye’ is an emotional remembrance for a beloved dog that leans hard into feelings of loss. A dog’s companionship features again in ‘Rootless’ the album’s most strikingly different tune. The earlier poetic interludes finally given full rein. A melancholy sway, like Mogwai in calmer moments, carries an introspective narrative of an anxious, transient, past in impressionistic details of surroundings that shift like weather, “I’m homesick for somewhere that I’ve never been”.

Having briefly gone fully inwards and quiet ‘Weather Warning’ bites with renewed ferocity and appears to be sung in three different voices. The possibilities of voice, as human sound, who speaks and who gets heard are a central concern. ‘Big Mouth’ is a key track pulling together a lot of these threads. After a couple of shouted verses it hits a really soaring chorus over some paint-stripping guitar. Next a potent sample of Poly Styrene’s intro to ‘Oh Bondage! Up Yours!’ floats in “Some people think little girls should be seen and not heard, but I think… UP YOURS! 1,2,3,4!”. It’s so well woven in that at first it seems to be just a quote, but it is an actual sample. Those opening seconds of X-Ray Spex’s first single are still a manifesto for female voices, still a driving motivation for bands like Petrol Girls, to speak up, to be heard.

As Aldridge softly spits in the album’s closing seconds “We’re not finished, we never fucking will be.” After a second chorus it calms a little for a spoken conversational verse. A compact expression of the approach they’ve taken on Cut & Stitch ‘Big Mouth’ sees three quite distinct vocals addressing their main theme stitched beautifully together inside a gloriously punchy and uplifting 3 min hardcore tune all while stretching but maintaining its basic form. This is the impressive trick they’ve pulled off here, extending and reshaping their sound without the whole thing turning into a confused and shapeless mess. If it sometimes feels they could have been bolder it also never goes totally off the rails, repeat listens revealing a very rich sonic patchwork, a great deal of attention to skilfully stitched together compositions.

They’ve not gone completely sewing circle on you don’t worry, Cut & Stitch is more human and more vulnerable, more varied and more interesting but it is still raging feminist post hardcore. It’ll still get your blood up, as the closing ‘Naive’ offers “I’d rather be naive, than a hopeless cynic . . . I choose to fight!!”