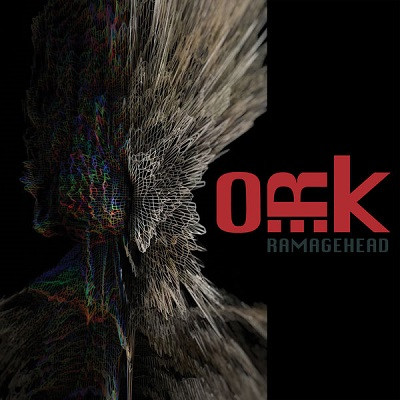 It’s been two years since O.R.k have released a new album after their 2017 release, Soul of an Octopus. O.R.k is formed by Lorenzo Esposito Fornasari (LEF) which includes members from King Crimson (Pat Mastelotto), Porcupine Tree (Colin Edwin), and Marta Sui Tubi (Carmelo Pipitone). This year, they were signed to the Kscope label. Home to Anathema, The Anchoress, Gazpacho, Paul Draper, Iamthemorning to name a few. That and their third studio album, Ramagehead shows that there’s a lot of electrical juice inside their veins. And to be allowed to have System of a Down’s Serj Tankian to appear on the album by singing one of the tracks from the album, shows that O.R.k want to lend a helping hand to bring Ramagehead to life. Not to mention a few of the centerpieces that are on this album, give O.R.k a chance to the shine their lights very brightly.

‘Kneel to Nothing’ opens the album with these dystopian lyrical structures whilst channeling the late great Chris Cornell of Soundgarden as if he had teamed up with the Undertow-era of Tool. LEF can hit those notes throughout his vocals while Edwin channels Paul D’amour as Carmelo raises the temperature levels on his guitar and Pat follows him in hot pursuit to bring everything to a halt. Serj’s vocals on ‘Black Blooms’ has a mournful scenario of a pastor giving a sermon inside an empty church that nearly send a chill down my spine. The duet between him and LEF work well together as Carmelo’s acoustic guitar sets up the destruction on what has happened before while the dynamics are set to erupt with Pat and Carmelo’s intensive punch-like collaborations.

‘Down the Road’ gives Carmelo a chance to go through a spiral staircase sequence by going up and down as LEF follows him with his singing vocalizations that have these melodic textures featuring in the background, children playing in the park. With the unexpected moment of “Big Brother is Watching You” effect as the Zeppelin is watching the empty streets to make sure everyone is asleep, you get the feeling that O.R.k is writing this as a score to George Orwell’s 1984.

The two-part section of ‘Some Other Rainbow’, which sees LEF set up the reminiscing of both Steven Wilson’s Grace for Drowning and honoring the late great David Bowie, shows us this section of the composition throughout this person’s last final moments before his death inside his own prison by seeing one last glimpse of the rainbow. Then in the second part, O.R.k brings everything in full as Edwin and Mastelotto set up the arrangements to close down the curtain as the fire rages for the final sacrifice by giving LEF a chance to pour his heart out as if he was inside the statue of the Wicker Man.

Ramagehead isn’t just an incredible album from start to finish, but what O.R.k has done is bring the listener into a voyage of the dystopian futuristic version of the 22nd century by showing us the dangers and the nightmares that are about to unfold. And what is to come once we get closer to that visionary landscape.