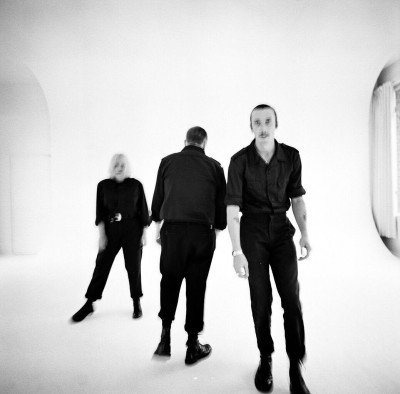 Though written more than thirty years apart both Post-Punk, Politics and Pleasure in Britain and File Under Popular explore the idea that radical music is about more than lyrics, that the production of radical culture/music should ideally also engage with and reconstruct the process of production, distribution and musical form. Music emerges from a certain set of wider economic, political and social circumstances but also from the far more specific set of circumstances that exists in and around the band; how it operates, the creative process, it’s relationship to the means of production etc. London based Girls In Synthesis take their inspiration from post punk and consequently have a deliberate DIY (DIT?) ethos, they’ve kept everything in-house; artwork, videos, performances and recordings all being created by the band and a small group of collaborators. In an interview from 2018 John commented “There was definitely a strong and clear vision before we played a note or wrote a song. The vision was to bludgeon the ears, without resorting to heavy riffing, distortion, rock n roll clichés etc. It has certainly evolved over the last year and a bit into something a little more nuanced and subtle. We present the group as a full package, so if we can’t sell an idea to each other (visuals, music, presentation etc) then we veto it. That has been in place from the start.”(1) Ideas and music emerging from an egalitarian democratic art collective that’s trying not to merely reproduce existing musical forms.

Post-Punk, Politics and Pleasure in Britain, Resilience and Melancholy and File Under Popular all explore the importance of musical form and the concept that certain musical forms can convey particular ideologies (values and worldviews) due to either the structure mirroring (neoliberal) political values or via socialised associations. The idea that musical form can have political content/effect. Often musical form can perpetuate the cultural hegemony of a dominant ideology but it is also true that music can disrupt and challenge that hegemonic representation of society, be an artform that gives dissident expression to the lived experience of a community/class. This is obvious in GIS’ music which sounds like, and evokes, working class experience in 21st century Britain. It is the sound of music as self conscious resistance, music as protest constructed from cultural experiences/resources of fraught urban intensity, turning the weapons of neoliberalism back on itself. It is a music born of, and conveying, an intense, urban precarity. And, despite the fragmenting of working class solidarity and consumer capitalism’s emphasis on individualism and competition, this working class experience is recognised as shared. That’s why GIS’ music communicates so effectively because it comes from, and enters into, a shared experience, it is a reminder, recorded and live, of the excitement, strength and hope of community and empathy. Live this sense and experience of community is encouraged by the physical/spatial structuring of a GIS gig where John and Jim position themselves within the crowd, creating a participatory interactive situation, deconstructing the passive spectacle of entertainment consumption.

Watch the video to Disappear from the band’s first release. An amusing video of three people getting covered in gunge? Or a visual representation of life for those on zero hours contracts, on benefits, in casual work? Watch the bands faces, in 2.12 it somehow manages to encapsulate the sense of anxiety, of vulnerability, of entrapment that characterises many people’s lives. The band as presented to the viewer have no agency, no options, they have to sit there, cope with adverse experiences that have their source elsewhere, show minimal reaction, cope while simultaneously carrying out the next prescribed function. It is an expression of solidarity, of shared knowing, and in that is it’s importance, a reminder that despite the isolating effects of late capitalism our experiences are ‘in common’ and can be a basis for solidarity and class consciousness.