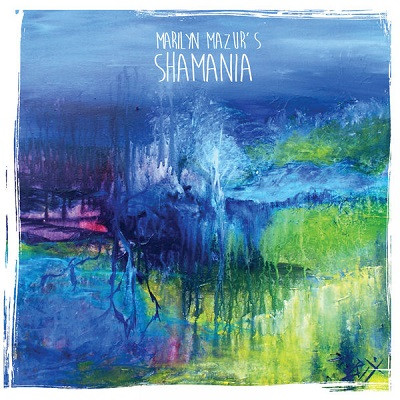 How would I describe this project by Danish percussion master Marilyn Mazur? It is quite the challenge. This is my first time delving into the music of Marilyn’s arranging and composition.

In 1978, she founded Primi Band in which it was an all-female music theater ensemble that drew from the primal energies and the experimental challenges that they were about to embark on. Mazur returns to the concept once more with a project called, Shamania. The first time they performed was on July 8, 2015 at the Copenhagen Jazz Festival and playing many of the largest festivals in Europe since making their debut. It received support from the Danish Arts Council and other organizations. This here includes ten female musicians from Scandinavia.

Released on Giacomo Bruzzo’s RareNoise label, Shamania brings in the artists from the Norwegian, Swedish, and Danish Avant-Jazz scene. Bix Beiderbecke once said, “One thing I like about Jazz is that I don’t know what’s going to happen next.” Well that’s the same thing with Shamania, you never know what is going to happen from the moment you listen to this album from start to finish.

It’s also the who’s who that are on this album. Now some of them I’m not familiar with, mind you. Now with Ellen Andrea Wang, I am very familiar with her work from White Willow, Pixel, and The Opium Cartel. But there’s Lotte Anker, Percussionists Lisbeth Diers and Josefine Cronholm, keyboardist Makiko Hirabayashi, and drummer Anna Lund from Hurrakel to name a few.

Some of the aspects from Shamania comes into the sounds of Neo-Classical, Free-Jazz, Avant-Jazz, Minimal, Free Improvisations, and unexpected twists and turns that Mazur and her team would come up with next. Recorded two years ago at In Rainbow Studio in Oslo for two days on the 13th and 14th of May, the music has this crossover between Keith Tippett, Frank Zappa, Gyorgy Ligeti, Steve Reich, Philip Glass, Edgard Varese, and the Ramsey Lewis trio.

For Mazur, she brings these different textures and creating this primal yet primitive movementum. Billy Bob Thornton once mentioned about Frank Zappa’s music in the 2007 Classic Albums documentary that covered his two studio albums, Over-Nite Sensation and Apostrophe (‘) “He took different styles of music and put them together. And pointed out that there aren’t really rules about them. They’ve been set up, but we don’t have to abide by them.” Well that’s the same thing with Shamania. Mazur and the female-led ensemble threw away the rule book by having creative control and free-rein by doing whatever they want. And of course the centerpieces that are on this album, show that there’s a lot of brainstorming ideas that the musicians brought to the table.

‘Old Melody’ has these eerie sections that would send chills down the spine as the piano, strings, and sax sets up this mournful Coltrane-sque atmosphere between Anker and Sissel Vera Pettersen. It has these post-bop vibrations as the vocalizations becomes this cry for the climatic gods that makes it a mournful tug.

The vocalizations on ‘Rytmeritual’ have this middle-eastern scat set in the hottest part of the Egyptian sun before the percussions come in to raise the temperature levels go up a notch. The rhythm sections between Lund, Wang, and the horn sections create this beat-poet like groove as if the sun is finally settling down for the night for the late great Allen Ginsberg to read one of his poetry’s set with some pounding kegs ready to erupt at any second.

Marilyn gives the vocalizations on ‘Time Ritual’ by delving into this echoing effect of Ligeti’s arrangements during the final sequences of Stanley Kubrick’s ‘2001: A Space Odyssey’. It has these dark cavernous reverb’s by walking into a dangerous tightrope. And you can never tell if someone is about to cut the rope unexpectedly before the end of the watery effects and some mid-shrieking sounds that brings everything to a halt.

With ‘Shabalasa’, Marilyn, Josefine, and Lisbeth show their nod to two people, Ruth Underwood and Frank Zappa. They set up this voyage to the sound of calypso music and scat assemblies with a melodic twist. Hildegunn Oiseth’s trumpet goes into this samba vibration as the percussionists follow her down to the beaches of Brazil for a chance to relieve the stress and dance until dawn.

‘Talk for 2’ and ‘Momamajobas 2’ have some of the most craziest sax improvisations that Anker does by returning to the roots of both John Coltrane and Lol Coxhill. The intensity level increases for the percussionist to go into this hay-wiring effect on their instruments before ending in the style of the Weasles Ripped My Flesh-era with an alarming howl.

‘Space Entry Dance’ is Oiseth and Anker working together as a team by walking into the territoires of Mazur’s take of Keith Tippett’s arrangements with Centipede. The percussions increase the heat levels more with some pummeling grooves by paying their nod to the fusion-era of Miles Davis.

As I’ve mentioned earlier, this was a challenge. Mind you, Shamania is not an easy album to listen to, but what Marilyn Mazur and the female-led ensemble team has brought her, is a complete out of the blue release from RareNoiseRecords. And for them to bring it right in front of your face, is quite the risk. So if this is your first time delving into the oceans of Marilyn Mazur’s music, be prepared. Because this is a ride you will never forget.