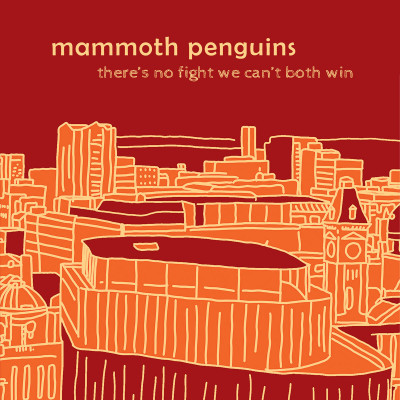 There's No Fight We Both Can't Win by Mammoth Penguins

Smart, melodic, indie pop/punk about the trials of love and friendship. There’s No Fight We Both Can’t Win is a really good album if you like that sort of thing. Look, I wasn’t going to write about this. Couldn’t think of much beyond that to say, and that’s not much of a review is it? Then there’s the name. Mammoth Penguins is a terrible name. Spattered with the lurid backsplash of ‘wacky’, suggestive of midlife crisis psychobilly bands. It got my attention though. Handy for internet searches I guess, a smart move in a world where bands apparently still don’t bother to check if their name is either already taken or impossibly hard to track down. The title and the artwork told a different story, neatly underlined by their songs. Polite, literate indie pop, the penguins sat snugly in their box. It was nice. I wasn’t going to write about it, there wasn’t anything to say.

But, it totally earwormed me. Not just one big tune either, three or four of them running around the back of my head unexpectedly. Not in that infuriatingly obvious way of a hook so catchy you hate it, and not in the distant “what the hell is it?” way either. I knew who it was, turns of phrase and twists of quicksilver melody that I couldn’t whistle but couldn’t shake. I listened to it some more, let it get its hooks right in me. And I thought I probably would have to write about it. I knew I’d regret this, what a sucker.

In their press shots they look the very definition of unassuming. Soft fabrics in autumnal colours. Casually but thoroughly anti-rock. Perfectly pleasant, borderline dull. They look like a woman sat with her brother and a friend in the pub, drinking responsibly, talking about books and walking holidays. Or perhaps having one of the franker but still ordinary chats in their songs, recalling other nights in here when “we pissed off all your friends, staying till the end” (‘Closure’). This calmness, I’m rather slow to realise, is their great strength. Emma Kupa’s songs are filled with everyday human warmth, dealing honestly with familiar emotions without making a huge drama out of it. On ‘Put It All On You’ she sings “You said I was everything and then it all stopped, like I was your hallway light that you just switched off.” It’s a fine example of her winning way with how mundane our rawer feelings often are.

The album’s conciliatory title comes from ‘There Is So Much More’ a glowing, healing, love song that offers the wonderful explanation “it’s not your good looks, it’s not your sense of humour… although that did help”. All the more striking to hit the chorus of the cracking ‘I Wanna’ and hear this level headed woman sing “fuck it all, fuck it all, fuck it all”. Not as a blurted misanthropic outburst or nihilist shrug of resignation but as a joyous abandon to the breathless infatuation of new found love. Blunt and yet still just sweet, it’s adorable. Not that it’s a soppy record, ‘Cold And Lonely Place’ opens on a steady chug and a scornful “You said I deserved to be happy, What on earth does that mean?”

‘Trust Me’ crystallises something about their songwriting, the verses intimate and conversational vocals crisply outline a set of concerns “Stop acting like you know it all, show some vulnerability” before giving way in the chorus to a soaring longing for connection “and let me in”. The music is generally understated, there’s a cleanness, a lack of unnecessary embellishment about it. It can sometimes drift towards the simply functional, ‘Doesn’t Work’ is a little dreary but saved by the sampled telephone conversations in place of a solo. ‘Quit My Job’ feels slight but features some lovely 80’s twinkles and a wistful sighing melody. They can build up to a fair wall of noise when the mood strikes though. ‘Let Yourself Be’ opens on soft strums “restraint and self discipline, oh what have we become?” and it’s message of not bottling everything up is echoed in the music as it closes out the first side on an enjoyably noisy wall of guitar. It’s one of several moments on the album that remind me of their former Fortuna POP! label mate Steven Adams, and where this type of thing is concerned that’s about the highest praise I have to offer anybody. There’s No Fight We Both Can’t Win – smart, melodic, indie pop/punk about the trials of love and friendship, it’s a great record if you like that sort of thing.