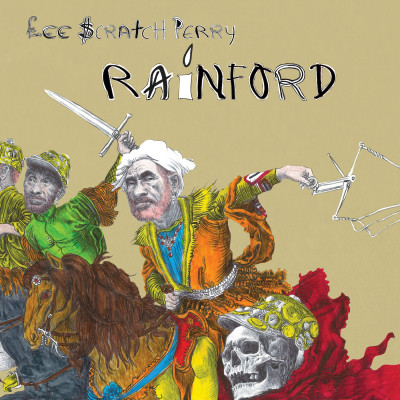 Let’s be honest, there’s unlikely to be a better reggae record released this year by a man in his 80’s unless these guys have got a wild dub of Rainford folded in their back pocket. Lee ‘Scratch’ Perry is 83 and hardly requires introduction but as this record casts it’s gaze back across his life and career here’s a quick one. Perry is most beloved for a series of extraordinary and inventive records he made in the 70’s at his own Black Ark studio pioneering dub and the idea of studio as instrument. In 1978 he burnt down Black Ark, possibly to defeat evil spirits, left Jamaica and wandered in Europe both geographically and creatively through the 80’s. His collaborator on this record Adrian Sherwood regarded Perry as his hero and was building his own On-U Sound legacy at the time. He can lay a fair claim to helping revitalise Perry’s music from the late 80’s on.

Were you to uncharitably see this as Sherwood cooking up some supple, elastic backing tracks for Scratch to babble gibberish over then the opening ‘Cricket on the Moon’ initially does little to dispel that notion. Coughing into life on a glitch the rhythm pitches in while Perry adjusts his mirrored hat and goes into full madman mode banging on about super ape in the moon and giving full rein to some of his wilder abstract vocalisations. There’s method buried in the madness though.

The Cricket and The Moon is an old folk tale about a hopeless dreamer, mocked by all but never giving up his dream. The album’s very first words “People repent” are muttered low over insectoid electrical chatter “see the rain man on the moon”. Rainford is Lee Perry’s given name, he’s the cricket, unfairly treated but pure of intention, it’s a familiar theme with him. The album’s cover shows Perry as the four horsemen of the apocalypse. Sherwood says it’s the most intimate record he’s ever made, a thread that comes to fruition on the closing track. Not that you should be expecting anything in the way of emotionally incontinent confessional, we’re still in Scratch-world, his own mixed mythology of popular culture and religious traditions and Jah alone knows what else.

‘Run Evil Spirit’ could be something he’s released at almost any point since the 90’s but introduces the use of sweet female backing vocals that give the album so many of it’s most beautiful moments. The irresistible sing song chorus and strident bounce on ‘House Of Angels’ and ‘Kill Them Dreams Money Worship’. They bring a gospel blues vibe to the more modern ‘Let It Rain’ which also features a gorgeous, unexpected swell of cello. It feels like a more serious lyric on the familiar Scratch theme of good and evil and then he offers “Don’t be naughty, like Paul McCartney… monkey reggae party”. Right. The busier ‘Makumba Rock’ seems slight at first “Voodoo rock, Zodiac rock. Lazy rock, crazy rock” but perhaps reflects on his mother’s Yoruba tradition as he cries for his parents, echoing the crying baby on his early single ‘People Funny Boy’. It winds up with another typically non sequitur observation for us “United Kingdom, Prince Charles will be King, Black Magic rock”.

Meanwhile, 23 years after Vol 6, Sherwood recently revived the On U-Sound Pay It All Back series. ‘African Starship’ here features on Vol 7. A rhythmically lopsided, aquatic and hallucinatory vision of Marcus Garvey’s Black Star Liner as an intergalactic mission it features some great trumpet and the wildest, most dubbed out production on the album. The lengthy, final track ‘Autobiography Of The Upsetter’ does roughly what it suggests as Scratch recounts a series of episodes from his own life as a mythological picaresque including burning down the Black Ark (“people thought I was crazy, walking backwards through the city”) meeting Sherwood and more besides, naturally including self-aggrandising declarations such as “I am the Upsetter, I come to wipe out evil-ness, I come to wipe out racism”. It’s a big goal for a little cricket, but it’s no less worthwhile. Perry has remained insanely prolific, falling forever short of his 70’s achievements, something was lost in the fire no doubt, but improbably he’s still working even now. Rainford is more focused than he tends to be nowadays and features great work from Sherwood. It’s a strong late career album.