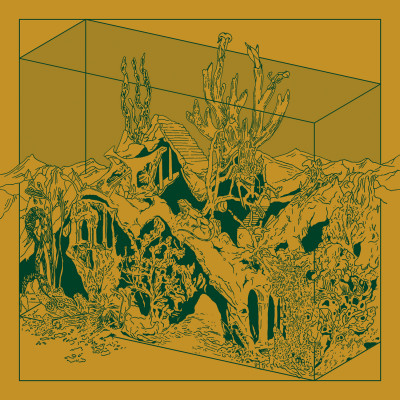 Kooba Tercu are all over the map. Figuratively and literally. Their members are split between Athens, Crete and London, which must surely make rehearsals a pain and probably means they don’t play out that often. Which is a shame because on the evidence of Kharrüb they’d be a cracking live proposition. Echo Canyon and parts of Casual Nun are among those involved here, gathered to record some stuff that’s been years in the making and some created anew. They describe this as the first release from these sessions, implying more to come and suggest Kharrüb is “a beautiful smooth flow of songs to be listened to as a whole”. This is perilously close to taking us “on a journey, man” which I’m not sure they’d shy away from. There’s a faint hippy streak for sure, a strand of cosmic Mediterranean beach. Their noise rock psych soup has a lighter, brighter feel than the heavy downer Sabbath/Hawkwind vibes common among their northern European peers.

‘Cybele’ opens on an urgent pulse, joined by a wordless chant and upward motion. As it gets wilder and more frantic, there’s a strong urge to raise your arms and face to the sky. Around three minutes in it absolutely kicks off, charging dementedly forwards with a manic energy. A droning coda makes space for the arrival of the loose marching band percussion and squalling noise of ‘Boto’. Filled with clanking cowbell and some delicious slide guitar. It reminds a little of their fellow Mediterranean psych groovers Mamuthones but it’s hyped way up like an ecstatic crowd edging towards chaos. On ‘Maestur’ a steady noise rock stomp underpins harsh edged electronic scree and squealing feedback. When the bass hits it’s a pretty irresistible lurch until the rhythm cuts out and a great layered noise ending fades slowly out to the sound of waves.

‘Margarie’ opens quietly on what you’d swear was the sound of spoons in teacups. Again riding a looping electronic figure but dappled by shafts of playful light. The vocals have gone from screams to smudged and sunken. Like we lay down at the water’s edge and let the waves wash over, leaving us staring up at the surface. ‘Got The Fire’ brings back the ecstatic polyrhythms, lifting droning synths over a deep descending bass line as they chant the title. Easily the clearest lyric on the record, the credits note “All the music and lyrics from Kooba Tercu except ‘Got The Fire'”. It doesn’t say who added that magical element, and maybe it’s musical not lyrical but chanting “We Got The Fire” over and over is not exactly Leonard Cohen on Hydra. The track is a total winner though, celebratory and infectious, chaotic and driven. A little like that first Holy Fuck album but more pagan.

‘Got The Fire’ rolls to a stop rather than ending with a bang but for the last couple of tracks it seems we’re in the aftermath. Lost out under the sun somewhere, there’s road sounds and distant hand percussion. ‘Shambles’ is the most stretched and abstract thing so far and yet, with its sighing vocals and loose, slow building groove its also the most melodic. Having passed out in the dunes it staggers back to the ragged remnants still dancing around the fire but decides to wander off and stare at the horizon. The last track ‘California’ is an absolute beauty. Wide eyed, washed out, warm and happy. A simple riff and slow airy drums roll like gentle waves while distant cooing vocals echo over a reflective melody. It has the calm of sunrise about it.

The cover seems to show an impossible fish tank, its contents escaping, nature vs structure or something. It’s a murky yellow brown colour that I have my suspicions was meant to be gold. The production has a little of that murk about it, could be a little cleaner and clearer but I like this record a little more every time I play it. Close listening has helped me to find the lizard at the centre.