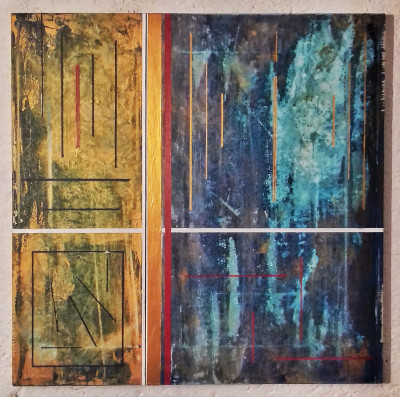 A question: What is a Fuzz Club Records release without the fuzz? The answer: diversification!

Joking aside, JuJu or the Italian artist Gioele Valenti and Maps & Territory, his third solo release under the moniker is yet more proof that pigeonholing a genre like the psych rock is simply an expression of narrow-mindedness, or to be a bit milder, just a wishing well of how you perceive a certain musical genre. For some, Maps & Territory might not be what they expect from a Fuzz Club release, but psych is such a wide-encompassing genre that never recognized any borders, and it still doesn’t. JuJu and his new album are here to prove this point. And bring along some mighty grooves.

In essence, as the title of the album speaks in a way, throw away your (musical) maps and concept of a confined (musical) territory and swim, fly or walk by crossing boundaries. That is what Valenti does here. Tribal grooves, Krautrock, Tuareg guitar styles, he sticks them all in and keeps rolling around in style, this time accompanied by members of Goat and avant-garde composer Amy Denio.

There is a continuous feeling of a trance-like state, from the opening ‘Monster And Servants’ across ‘I’m In Trance’, the Goatman collaboration, ‘Motherfucker Core’, the outstanding track here to the concluding Amy Denio collaboration ‘Arcontes Take Control’. The groove never ceases it just shifts and mutates, picking up musical traits and traces along the way. The closest it gets to the “pure” concept of psych is on ‘If You Will Fall’, reminding of Mercury Rev at their most experimental. No wonder Rev are Juju fans, as he toured with them too.

Maps & Territory is one of those albums for psych music aficionados who see the genre in a much wider concept than just fuzz, acid, and flowers.