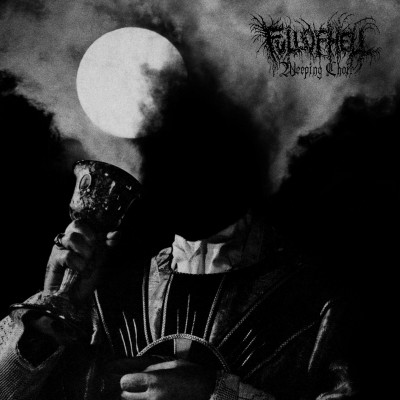 Weeping Choir by Full of Hell

For their first release on notorious home of extreme music, Relapse Records, Full of Hell have enlisted the knob-twiddling expertise of Converge’s Kurt Ballou to help shape and craft this hellacious musical assault.

From the distinct sounding studio space to specific segments of songs, the Converge man’s fingerprints are all over this album. The punchy breakdown in ‘Ygramul the Many’ feels like it could have been lifted from Petitioning the Empty Sky whilst the red-lining mayhem that sees out the opener is pure Jane Doe frenzy.

That’s not to say that Weeping Choir is derivative. Far from it. The band have inescapably drawn upon aspects of their experiences and their influences to create this wild and abrasive album. At times there are echoes of The Red Chord, at others, The Body. On the longest (and most moving) track – ‘Armory of Obsidian Glass’ – we are treated to the daunting vocals of Lingua Ignota’s Kristine Hayter (whose highly anticipated new record – Caligula – happens to feature the guest howls of Full of Hell’s Dylan Walker). What starts off at a hefty gait, like trawling through foul muck, then lurches up with sickened wailing, mimicking the rise of nausea. There is a brief respite with swept guitar chords releasing Hayter’s waif-like melodies before the inevitable carnage returns. But her voice holds strong, cutting through, drowning out the misery, elevating it all. That angelic choir governs all. Even the white noise that bashes in, desperately trying to take hold. Trying to take control.

This battle for control, of sparring with misery, is interlaced throughout the album. ‘Rainbow Coil’ is akin to the sounds of civilisation lost. A devolved race praying to a void after the lights have all gone out. This is the dazed aftermath of nuclear war. Feral outbursts soundtrack the pessimistic attempts at survival. The sole chant of “Your head is a radio for speaking to God” emerges amidst discombobulating sounds of industry and turmoil. It’s like experiencing the inner workings of mystical structures, that are revealed to minds via DMT, whilst crouched in the judgement day landscape of Terminator 2.

‘Thundering Hammers’ is comprised of a speed-sniffing sludge groove, which whips necks back and forth as “Crimes on humanity, crimes of insanity” is bellowed. Similarly, machine gun snares, slashing guitars and hellish blast beats ring out over a snarled shriek of “Praise” on ‘Aria of Jewelled Tears’. And, with ‘Silmaril’, we get a thorough treatise on brutality. It’s all heaving shoulders and furrowed brows. Still, it doesn’t last long. Can’t last long.

The epic ‘Armory of Obsidian Glass’ aside, Weeping Choir is largely what you might expect from a Full of Hell album. It’s a full-blooded attack from the panicked shotgun pump assault of the first track through until the short, sharp, and shocking scream of frustration beneath tepid bathwater that is the closer. We do get a few moments of variation – Hayter’s appearance (as previously mentioned) and an intriguing call and response pattern between instruments, vocals, and rhythms on ‘Haunted Arches’. What really sets this album apart, however, is how intricately it is all weaved. Themes are introduced, forgotten, finally recalled in the dying moments. Ideas of hallways, passages, and arches are dripped throughout, suggesting portals of understanding, of self realisation, hurdles, even. Snippets of haunting melodies are crowded out beneath the static of obliterated memory. Whispers repeat and reappear. As do jewels, and the vacuum of obsidian. There is plenty to unpack beneath this caustic juggernaut, but even a coast across the surface is rewarding enough.