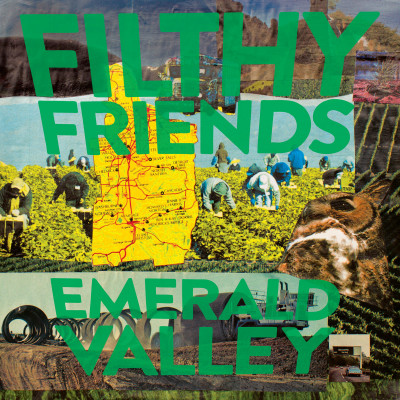 There have been times over the course of Peter Buck’s career where he has grown tired of the musical instrument he is most associated with. Like when he ditched the electric guitar and picked up the mandolin and other acoustic instrumentation instead, for R.E.M’s 1991 Out of Time. So, it is nice to hear he sounds invigorated plugging in the guitar for Filthy Friends. A band also consisting of Sleater-Kinney’s co-founder Corin Tucker. Their debut was an electric affair, but although in no way a bad album, it sounded like a band getting to know each other. Not quite fully flexing their song-writing chops to the max.

Their return with a thematic sophomore album, Emerald Valley, also gladly sees Scott McCaughey back in the fold after suffering from a stroke in late 2017, as well as Kurt Bloch, and new-recruit Linda Pitmon on drums. They all sound re-energised and as urgent as the themes they tackle. These said themes are the current global environmental changes and challenges, and the people who are at the fore-front of receiving nature and capitalism’s full impact. And while that alone deserves the listeners’ attention, the fact that they have equipped themselves with a superior set of well-crafted songs, notches up the quality considerably compared to their debut, Invitation.

The opening title track sets the scene and tone. It conveys lush greenery, ‘‘rolling fields’‘, ”vibrant green” but goes on to reveal the harsh realities, ”break backing work for little pay.” It was the first song to be crafted, originally from a Peter Buck demo and got the ball rolling. The devastating effects of oil production is tackled in ‘Pipeline’. ”Like a snake that runs through the ground”, ”spoil the land and the people can’t live, as we lay you down” is sound-tracked by a blend of vintage R.E.M and Television. Buck has always been an admirer of Tom Verlaine and fuses both his own quality assured finger picking styled riffage with a glorious Verlaine esque solo. While ‘November Man’ is a robust volume shredder, a loud and gritty garage rocker which never lets the roar lose sight of the melodies at its core.

Corin Tucker’s vocals are also a key component, strong, tuneful, assured singing, part PJ Harvey, Chrissie Hynde and Patti Smith. She rips and yelps during the incensed garage country punk of ‘Last chance County.’ She shifts between measured and impassioned vocal stylings for the storytelling ‘The Elliott.’  And, along with ‘One flew East’ these two songs are the slow burning earworms and highlight the maturity of the song-writing at play, as one would expect from these experienced pros.

Filthy Friends, Emerald Valley is a fine mix of vintage R.E.M, The Pretenders, Television, so, catchy alternative punk and jangly Indie, tied together by a singular but broad range of relevant topics. Corin Tucker may not provide the answers but raises the complex problems at hand, while never sounding preachy or patronising. A fine soundtrack, indeed, to the marching feet of striking, protesting schoolkids. While politicians from around the world should take heed. Well, there is hope with the former, at least.