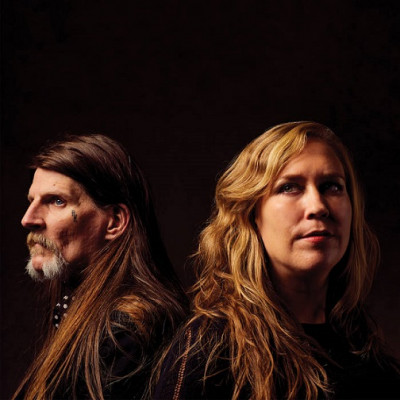 Full Upon Her Burning Lips by Earth

For thirty years now Dylan Carlson has been creating incredible and unique drone symphonies as Earth. With album number nine, Full Upon Her Burning Lips, Carlson has stripped back the sound so that “I feel like this is the fullest expression and purest distillation of what Earth does since I re-started the band”. Recorded with drummer Adrienne Davies, this collection of ten tracks does indeed showcase the considerable talents of two very in-tune individuals. For me, the overriding feature of a band like this, doing their own damn thing the way they do, is that when the mood is right, their music is perfection and unparalleled.

Previous (Mark II) Earth output has seen the introduction of cellos, piano and even vocalists, on the excellent Primitive and Deadly, but those are all swept aside for this album. As Carlson explains, “I limited the number of effects I used. I always like the limiting of materials to force oneself to employ them more creatively. Previous Earth records were quite lush sounding, and I wanted a more upfront and drier sound, using very few studio effects.” It is also noticeable that the drums are given a sizeable boost in volume but their presence isn’t overbearing, for the most part. Carlson felt that on previous Earth records “other instrumentation took up so much of the sonic space that the drums were kind of pushed to the side.”

Opening track ‘Datura’s Crimson Veils’ is a creepy dragged out drone blues number that I’m certain can reduce heart rates, such is the spacious pace of the piece. Adrienne’s drums lay out such a slow beat that keeping time must be an incredible challenge. Ghostly tones writhe over Dylan’s fuzzy, snaking guitars and although it appears that little is happening, there are subtle little shifts throughout the staggering twelve minutes, so that what could be a chore to get through is actually a blissful ride. Thrilling harmonics permeate the fleeting ‘Exaltation of Larks’, which sounds like a jam session with a doped up ZZ Top.

On lead track ‘Cats on the Briar’, Dylan’s guitar work is sublime as layers of delicately picked off melody lines interweave a marvellous mesh of memorable hooks. The track threatens menacingly to explode into life but this is Earth and they have no urge to rise above the steady levels laid out at the outset of the track. The riffs get chunky on ‘The Colour of Poison’ but the stop/start pace is mechanical and disruptive compared to the liquid flow of the other tracks. Next up is the wondrously named ‘Descending Belladonna’ which shimmers like a pulsating heatwave over a deathly desert, scattered bones collected to embellish the percussive clink and clank.

Adrienne’s drums on ‘She Rides an Air of Malevolence’ slip and slide like broken pistons grinding to a halt, while Dylan’s guitar sighs and stretches elongated wandering lines. His ability to control the feedback that constantly threatens to escape is wondrous and it creates an almost unbearable tension. ‘Maiden’s Catafalque’ takes the unique approach of essentially being a loose drum solo, with some added guitars that appear reluctant to engage the wanton advances of the beats.

With the blueprint for the album firmly established, the overbearing ‘An Unnatural Carousel’ gets me to the point where I’m thinking I’ve heard this one before. The swirling guitars and clipped hi-hat beats are exceedingly familiar and can’t hold my attention over the sprawling ten minute duration. Thankfully ‘The Mandrake’s Hymn’ features a muscular twisting set of gnarly riffs that elevates interest again. Finally ‘A Wretched Country of Dusk’ ends the album with another (by Earth’s standards) upbeat track that actually has an ambience of hope. The spidery riffs are impressively optimistic and the gorgeous melody that eventually seeps out is stellar and joyful.

As I stated previously, for me to really engage and enjoy Earth, I need to be in a certain state of mind. Mercifully for those around me, that state of mind isn’t an everyday occurrence. Any previous inclination for ‘enhanced’ relaxation has left the mature me so it is down to the power of music alone to drive me to the places of escape and bliss. Earth certainly have that power and Full Upon Her Burning Lips is an album that requires repeat plays in order to absorb the many nuances contained therein. Give into it and enjoy the journey. 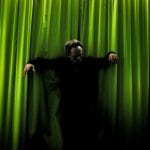