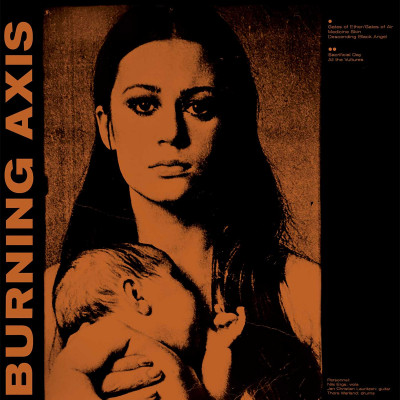 I was initially drawn to Burning Axis by their striking cover art (and of course their status as a band releasing with Hominid Sounds), the black and orange image, featuring a woman seemingly staring into space whilst holding an infant. There was something unnerving and haunting about it but, at the same time, it was alluring and captivating. There’s a ghost-like quality to it. I have come to find that imagery to be perfectly evocative of the music it represents.

This seamless album of opiate, slow-core hypnotics is built on a foundation of transcendental mid tones and aggressively shrill punctuation marks. It seems to fit in nicely with the new stuff Sunn O))) are putting out and also with Echoes and Dust’s favourite album of last year, the oft called Doom-Gaze self-titled album from Palehorse/Palerider. Generally, this album is a kind of heavier take on that, there’s a kind of Dead Can Dance funeral dirge to it, with a great deal of suspense being built across the first four tracks, relenting only occasionally for some monolithic thuds of guitar and drums, it feels almost like its not going anywhere until the end of ‘Sacrificial Day’ when the album erupts into fucking chaos. It feels like the band is jamming my face in a paper shredder and I’m weirdly into it. It certainly makes it seem as though the slow burn was worth the wait.

However, it’s quite a difficult listen, it almost feels like the band is toying with the listener, you spend the first half of the album wondering when the hammer’s gonna drop and the latter half thinking you’re in for more chaos but, they ending of ‘All The Vultures’ kind of feels like a big middle finger in a way. On the one hand, I think it’s great and for some people it might actually be intense enough that the ending is a relief, but, after the carefully woven first half, I’m left wondering, is this only part of a longer piece of music? Are the dots on the cover not indicative of which side of a vinyl they’re on but, actually that like for example, with The Fierce and The Dead’s Part 1, Part 2 et cetera series, there’s more music to come flowing out of these final tracks? In any case, I fucking hope so, this album is a well executed build to a satisfying crescendo or a dazzling anti-climax and as much as I like the tracks they’re creating overall, I’m really wondering where Burning Axis will take the listener next.