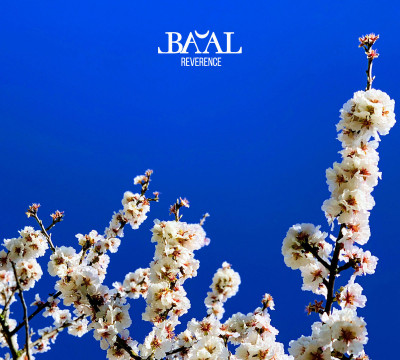 Sometimes implosions are just as dangerous and messy as explosions and Reverence is rumbling from the ashes of a fall out few on the outside were expecting. After making great waves with debut EP In Gallows By Mass and Russ Russell produced single Thy Sorrow, this website foresaw great things to come for Ba’al. However, not long after the later release vocalist Steffan Benham left the band reportedly in an amicable split. Ba’al had a short period of instrumental shows, but has now returned with a new vocalist and three new tracks and still manages to make further strides to fulfil the early signs of promise.

Ba’al always struck me as falling on the metal side of the post-metal fence and the fence seems to get further away the moment ‘Grief Tourist’ kicks in. Black metal drenched vocals blast over a tremolo guitar line, rumbling bass and rapidly pounding drums. However this initial outburst lulls after a minute and the rest of the EP flows between the heavier vocal moments and some more surprising lighter touches. Title track ‘Reverence’ glows and shimmers in its stripped back droning post-rock feel as it cleanses the ground before the stunning climax to the EP.

Gone are the soaring vocals that really made ‘One Under The Sun’ and ‘Thy Sorrow’ such incredible songs but they have been replaced with the darker presence of Joe Stamps and the upping of the musicianship. ‘Sepia’ is an absolute brute of a song that battles with itself for nearly 10 minutes with incredible crescendos and a range of harsher vocals that struggle to keep out the light. Here the rest of the band comes to real prominence as it sweeps you away using just the instrumentation rather than dominating with the lyrical hooks of previous releases. Around the black metal vocals and harsh screams you can hear the guitar churning like a chainsaw as it appears in the cracks with a heavy chugging riff and the drummer is like a man possessed hitting every inch of the drum kit.

When looking at the artwork as I started listening to this EP a line from a classic Disney musical came to mind: “From the ashes of disaster grow the roses of success”. Although that scene in Chitty Chitty Bang Bang didn’t show any signs of success, Reverence is a far different beast. The music has taken a real boost here and this may have come from the time playing as an instrumental unit. Every aspect seems to be up a notch, the guitars just seem more alive and the drums are pounding and enthralling. Reverence shows great progress in the face of what seemed a great challenge, Ba’al make it seem so easy.