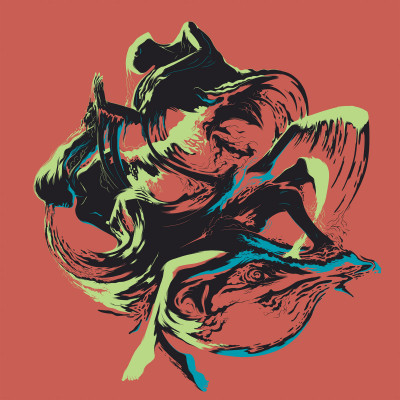 On April 12th, Atsuko Chiba (AC) released their long-awaited album, Trace. If you don’t already know this, AC is a band of five from Montreal. Trace is methodical, tight and smart as fuck. It has more vocals, which I love, and a lot more synth, which I love. This band never disappoints and often surprises fans with each release. This release is no exception.

The album is made up 8 tracks that flow into one another and come together to form an incredible soundscape. Trace comes out swinging with its funk infused with heavy and ends on an introspective post-rock ride. My most favourite tracks on the album are ‘Captain Colair’ and ‘Dry Ice’.

The track, ‘A Heretic of Arrogance’, starts the album off with a great synth start. A low drone with a melody playing over top lulls the listener until the drums start and everything changes. A great addition to this track is the trombone and trumpet which add a cinematic feel to the track. I really love the reverb on the guitars and the synth is incredible.

‘Pawn to King I’ slows things down and seamlessly flows into it’s funkier hard-hitting sister track, ‘Pawn to King II’. The synth, drumming and bass line are pretty cool as well. Karim Lakhdar shows his vocal prowess at not only hitting fans with his Zack de la Rocha (Rage Against the Machine) style but a softer side as well.

There’s something about ‘Captain Colair’ that really got to me. I just love this track. It’s all-encompassing and exudes everything I love about the band.

What can I say about ‘Dry Ice’? I was just a baby in the 70s but I did grow up listening to funk and have always been a fan. This track just brings me back to those days. It’s a delicious funk ride filled with great vocals, synth, guitar and bass work and those drums!!!! Anthony Piazza is incredible behind the kit. The horns on this track just blow it out of the water. Incredible track.

The last two tracks on the album bring us back to a more ambient sound. I found ‘Hold On’ as an intro to ‘New Folds’. ‘Hold On’ had a Pink Floyd vibe to it. Again, Karim shines again on vocals. When I first heard this track I thought, damn, over too soon but not so as it flowed nicely into the last track. As with ‘Pawn to King I and II’, ‘Hold On’ starts the listener on a quiet ride then kicks it up a notch with ‘New Folds’. ‘New Folds’ has great changes in it and I loved the quiet yet noisy, distorted end. Great way to end the album.

Good things come to those who wait and this is the case with Trace. Atsuko Chiba are masters at writing and masters of their instruments. I hope I get to experience this album live.