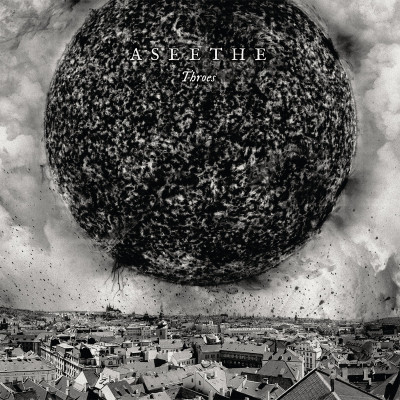 A while back, Hydra Head had a clearance sale of sorts. Things went fast, naturally, but I managed to snag a few goodies. The first was the picture disc reissue of Mayhem’s De Mysteriis Dom Sathanas, which sounds far better than a picture disc reissue has any right to. The second was Aseethe’s mighty Hopes of Failure, an excellent slab of experimental American doom designed to test your subwoofer and drain you of hope, an album informed just as much by the minimalist movement as it was Earth. That was 2017. This is 2019. How does their new one, Throes, fit with the extreme metal pantheon in which I’ve somewhat arbitrarily put it?

After some rigorous and highly scientific tests involving my own stereo set-up (including a Velodyne sub), I have to say that the results are… excellent. From the very first riff on the title track, you are thrust into the exact world that Aseethe wants you to be in. By western standards, this opening salvo would probably be considered atonal (or perhaps discordant), which shows you that the band is willing to experiment with tuning systems outside of the norm. This throws the listener out of their comfort zone and articulates a very particular philosophy of the world, which might be best aligned with the Romantics; the great German thinker Novalis, after all, once said ‘chaos must shimmer through the veil of order.’ Indeed, this is exactly what this album does. (Of course, chaos is relative, but the roughness of the tone and tonalities certainly chafe against the highly ordered precepts of western music theory.)

Aseethe is on a quest to find disconcerting and jolting tones and harmonies, as many are. This may seem bizarre to say, but their “variations on a theme” recall not merely Earth 2, but that album’s own forebears, Terry Riley and La Monte Young. Maybe I just have Terry Riley on the brain; I’ve been meditating on a quote of his recently: ‘every single great moment of music that’s come through you has come through you literally… it never originated in anything that you call yourself but actually just passed through.’ To me, this near mantra is the apotheosis of the general post-human attitude of many droning doom bands, and it makes this album’s title make a little more sense to me. For one doesn’t often say “throes” by itself; one is in the throes of something. What that something is, I can only begin to speculate, and I doubt it’d be communicable by verbal language anyhow. But with their endless riffs, idiosyncratic ear for harmony, and keen understanding of the power of timbre, Aseethe might have some ideas about this “in.” We should listen.