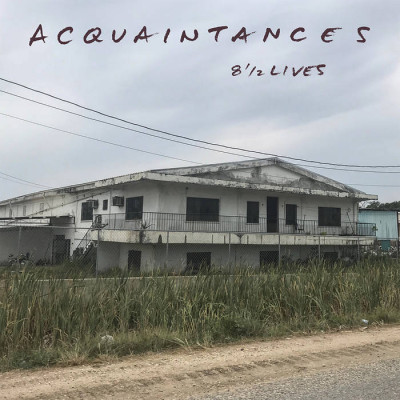 Acquaintances are set to release their second album, 8 ½ Lives, May 31st, on digital and vinyl formats via Chicago based label, File 13 Records
and on cassette via British Columbia (Canada) label, Coup Sur Coup. The album is made up of twelve tracks that explore the theme of mortality, as suggested by the album’s title. Although the theme of mortality is usually one of thoughtful contemplation, the guys in Acquaintances come at it with a rock out approach, and I for one find it refreshing.

The album is filled with great guitar and bass work and the drumming is phenomenal. The vocals bring a cool and collected approach against the often frenzied and noise-infused instrumental. The whole album brought me back to the late 80s early 90s alternative rock scene, more specifically the Canadian alt scene of that time reminding me of bands like 54/40 and The Tragically Hip.

Another interesting fact is that this album was not recorded in the traditional sense; having all band members in the same room recording at one time. The guys are from Chicago, Philadelphia and Portland. They recorded the album over the course of a year which included travelling and shipping of recording gear back and forth between cities. Although this is happening more and more between musicians, I still find it a huge undertaking and a testament to patience and the love of music.

There are three tracks that stick out for me on this album, ‘A Night in a Town’, ‘I’m an Artisan Goddamnit’ and ‘A Few Seconds Ahead of Your Ghost’. Wait for the great change 3/4 into the track, ‘A Night in a Town’. Goodness, it’s so great. The track, ‘I’m an Artisan Goddamnit’, just made me laugh. So witty and also the shortest track on the album. Then the album ends with its shoegaze influenced track, ‘A Few Seconds Ahead of Your Ghost’. Great way to end the album.

File 13 Records chose well in celebrating its 30th anniversary by having the 8 ½ Lives album as their 95th release.