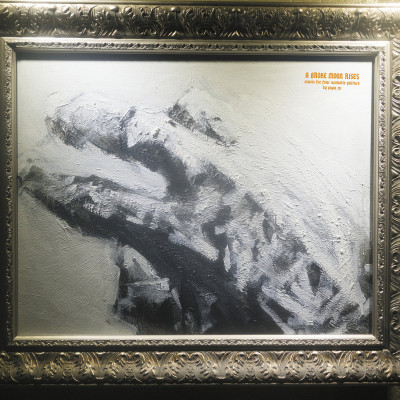 "You know, I'm not a minimalist composer, I didn't grow up in that world, I grew up in a punk rock world. Limits have to be stretched, you have to test them - or break them." ... “Content is a word that just drives me crazy now.”

I’m sitting on a park bench on a dark, rainy evening in London, talking to David Pajo. He’s barely woken up in sunny Los Angeles, yet despite the distance in space and time – and the fact that he’s David-fucking-Pajo – it’s been an easy, relaxed conversation, as if we’re chatting in the pub. We excoriate the concept of capital-C ‘Content’ in the modern era, David gleefully laying into the word. “People talk about content like it doesn’t matter what it is, it’s just content, you know? Like fuck, I don’t make content – I’m trying to make something compelling! In my mind – and this is my scatological humour I guess – it could be the contents of a jewelry box, or it could be the contents of a toilet. When you use the word content, it doesn’t matter. It’s still content – even if it’s a steaming turd.”

Looking at David Pajo’s career, you might say – out of earshot –  that he’s quite the prolific content creator. Since his early days with genre-defining-and-defying band Slint he’s gone on to release numerous solo records as Papa M, Aerial M, and under his own name, as well as being a periodic member of Tortoise, The For Carnation, and Royal Trux, and has collaborated with Will Oldham (aka Bonnie Prince Billy) among several other artists. Creating music, whether on his own or with others, has been his life’s work – with a labourer’s attitude reminiscent of the late Jason Molina, for David music has been love and work, and love as work. The spread of genres covered by his career is vast – across the Papa M discography alone you’ll hear trip hop, math rock, post-rock, electronica, and alt-country. The contents of David’s jewelry box are multifaceted and iridescent, but the particular jewel I wanted to inspect in our chat was his latest and most singular solo release, A Broke Moon Rises.

Released in August 2018 with little fanfare, A Broke Moon Rises is a quiet affair. A suite of four original compositions and a cover of Estonian composer Arvo Pärt’s ‘Spiegel im Spiegel’, ABMR stands out amongst David’s discography in its clarity of purpose. Where his previous record Highway Songs leapt from genre to genre with abandon, ABMR burrows down within its style and makes a home. David attributes this to a restrictive approach to songwriting: “It was a fun challenge for me, to just see what I could do with four acoustic guitars and not rely on effects, amps, strange tunings or anything and just have fun with it.” While he calls it fun, he took this challenge seriously, referring to it as a “manifesto” several times during our conversation.

Beyond the limitation on instruments, another tenet of this manifesto was keeping the amount of digital mixing and studio tricks to a bare minimum. “There’s an unbelievable lack of parameters in digital audio software, where you can do just about anything – you can make a shitty performance sound great. I wanted to just really limit every aspect of that recording, you know. Just keep it simple for me, keep it easy for me – which ended up being a lot of work, of course. You run it, and if you fuck up, you go back and tape over – you do it again.” Strict as this may seem, David isn’t the type to stick too closely to rules. On listening to the album, one might get suspicious of how truly he stuck to his self-imposed law of four acoustics – sparse, but very much present drums and electric bass stick their necks out frequently. Rather than undermine the record, these points of rule-breaking allow it to fulfill that manifesto to its best ability. “If you can set up rules, it’s also okay to break them once in a while. You know, I’m not a minimalist composer, I didn’t grow up in that world, I grew up in a punk rock world. Limits have to be stretched, you have to test them – or break them.”

The influence of minimalist composers – despite David claiming that he isn’t one – saturates A Broke Moon Rises. While discussing the warm, meditative mood of the record, David offers an explanation of his shift into this mode: “I’ve tried playing all different types of music, but I like a record that I can listen to on a long road trip and zone out to, or I can listen to it as I go to sleep and it’ll relax me. Not a bunch of new age synths where I start thinking about how they recorded it and the programming and stuff like that, but something that’s repetitive enough that it’s like a brain massage.” This is a feat that he creates remarkably well on the record through elastic, ponderously paced pieces of ambient guitar work – not ambient in the New Age sense, but in its enactment of Brian Eno’s vision for the genre – “[to] accommodate many levels of listening attention without enforcing one in particular, it must be as ignorable as it is interesting.”

ABMR holds this ethos close to its heart, but like the personal manifesto that David applied to the recording, it’s disregarded as and when David’s restless mind and fingers get tired of it. For this eternal punk rock kid, the call of the riff is just a little too alluring: “I’m not a minimalist composer, that’s not my roots, and at some point I just wanna hear somebody play a riff.” He rolls his tongue around the word riff with childlike glee. “Like in ‘A Lighthouse Reverie’ it goes from this real Reichian part to everything playing the same riff. That’s something I’ve always liked. It’s sort of like with Slint – we would play quiet and then we’d hit all the distortion pedals at the same time and it would be this kind of jolt. And unfortunately that became the aspect of the music that most people kinda aped or whatever. It’s the most basic thing you know, quiet to loud. Clean guitar to distorted guitar. But I tried to do that without the distortion, with Aerial M and everything, you know. Early on I was just like let’s create a repetitive atmosphere where it’s hypnotic enough to get to where you feel like you know what’s happening and you’re just letting it drift, and then all of a sudden everyone plays the same thing at the same time. You don’t necessarily need to go from quiet to loud or clean to distortion, you can do it just going from repetition to an abrupt moment.” Old trick this may be, but David has lost none of his proficiency with it – these may not be headbanging riffs, but his guitar work on ABMR twists the hard groove of his riffing of old into bright melodic origami that satisfy in a completely unique way.

Taking up almost a third of the record’s runtime, the final track on the record is a patient and vulnerable cover of Arvo Pärt’s minimalist masterpiece ‘Spiegel im Spiegel’. Like an epilogue to the record, it quietly stretches itself out over 13 minutes of creaky intimate plucking. You can hear the sound of the air moving around the room, David’s hands on the frets, and his quiet curses when he stumbles. A plaintive croon that sounds almost like a mellotron – it’s an ebow on an acoustic, of course – hovers over the twangs. It seems odd that the pivotal piece of the record should be a cover, but the emotional weight of sudden withdrawal into empty space as the frantic joy of ‘Shimmers’ crumbles into ‘Spiegel im Spiegel’ begs to differ. It’s a blessing that David decided to include it, as at first he didn’t feel that his version would cut it: “I was actually hesitant to put [‘Spiegel im Spiegel’] on the record, because the original is so beautiful. There were a couple of times where I was like man, I’ve butchered that song. And so it went through a lot of different mutations, but in the end I felt that it summarised my approach to the other songs, you know? I used some of his composing techniques in the other songs, so it felt like a good reference.”

This post-mortem display of the delicate skeleton underneath the songs has a rejuvenating effect – there is nothing I want to do more after finishing ABMR than flip it back over and start again, with the last arpeggio ringing in my ears. As I tell David this, he breaks out in an audible smile: “Ah, that’s really great. That’s great to hear, because the hardest thing is to make a record that stands repeated listening, you know. A lot of times you’ll listen to a record and never feel the urge to go back and listen to it again. But if you can make a record that makes you want to check it out again, or it just hits that mood at that time, you know, that’s a success to me. I don’t care how much it sells or whatever – if it stands repeated listening, it’s successful.”

This disdain for the idea of making a commercially successful record carries over into David’s plans for the future. He tells me excitedly that his plan for his show supporting Sunn O))) is to write a new original piece – no fan favourites, no oldies, and definitely no Slint. Just one Pajo, a guitar, and an hour-long song. After the tour he intends to get back in the studio with Steve Albini, who helmed Slint’s gnarled and strange debut record Tweez, and put the new ideas he’s writing for the tour to tape with a full band. This news that had me grinning ear-to-ear and walking laps around the park – and glad this was a phone interview. David is fully aware that releasing a single-track, one hour record isn’t the savviest financial decision, but this isn’t a businessman. This is David Pajo. “It could change along the way but that’s how I envision this project – which is horrible, you know, it’s the dumbest thing from a music business perspective. You don’t want to download one song on iTunes for a dollar, and that’s your entire album! From a business standpoint it’s the worst. I am the worst at business stuff, and promotion – any of that kinda stuff. But, who cares. It really is all about the music. I’ll let whoever puts it out figure out how to make it a profitable venture. That’s not my specialty, I just come up with the – hate to say the word – content.”