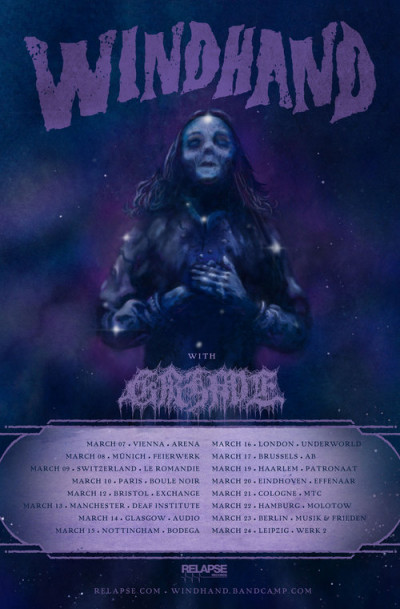 Entering on stage, all dressed in black, it takes a few moments before Richmond Virginia’s Windhand set in motion their heavy mid-tempo grungy doom dirge. Once they begin, a tad uneven sound emerges and even a sense of nervousness from the band can be felt. Thankfully, sound improvements are quickly amended and the band proceed to hit their (mid-tempo) stride. Promoting their fourth and arguably best album to date they do indeed plough deep into Eternal Return for their set. And this only increases the sense of a band fully establishing their own rich, thickly coated atmospheric sound and identity.

Windhand may not venture too far from thickly applied, dense riffage. But Ryan Wolfe’s mid-tempo hard thumping rhythms, Dorthia Cottrell’s moody downbeat but reflective, dreamy and ethereal vocals, and Garrett Morris’s explosive swirling guitar solos, amount to some seriously fine and thoroughly absorbing, cliché free, classy atmospheric heavyosity. The band themselves, locked into their own slow groove, are fully immersed in creating a sound that they once confessed in a music-magazine feature as simply reflecting their own moods.

Throughout the hour-ish long, encore free set, Windhand possess a quality which combines a soulful, heartfelt sincerity. Effective metal doesn’t always have to be about aggression and ferocity. And when even the smallest amounts of nuances and intricacies can elevate a band above the ever-expanding scene’s population, these Virginia moodists are effectively perfecting theirs.

The set never dips at all, but there are specific songs which showcase their continued quality-assured evolvement: ‘Diablerie’, ‘Grey Garden’ ‘Halycon’ and the light and heavy contrast of ‘Feather’ are huge tonight. And the benefits of having Dorthia’s vocals higher in the mix is the lyrics can be heard; it may not incite a crowd singalong, but the effect encourages this reviewer, at least, to join in quietly to myself at various stages.

Windhand are just one of a batch of bands currently proving new breath can be successfully applied to heavy doom textures, and tonight’s performance proves they are indeed at the forefront.