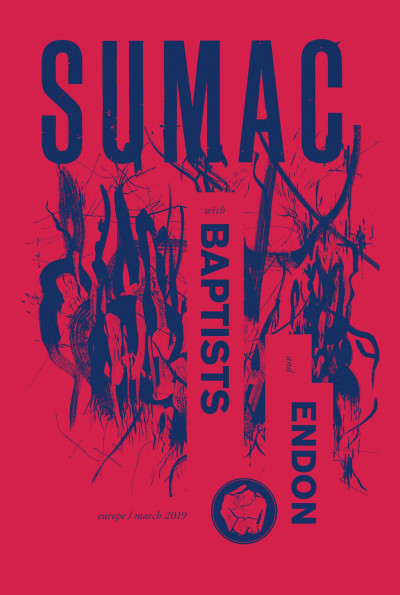 It’s always tempting to start a summary of anything that happens on St Patrick’s day with either a snide commentary on the excesses of the day’s festivities (which, in a roundabout way, this is) or a well-intentioned celebration of them, but when line-ups like tonight’s are handed to you, that would just be cheap. ENDON waste little time in building up a head of steam so it isn’t long before sweat is dripping from Taichi Nagura and, soon after, the ceiling itself. What begins as a skewed riff assault, Koki Miyabe veering from noisy sludge to all-out guitar-GBH, gradually shifts into a singularly unique approach to noise.

The band endeavour to pull in all directions at once, each member offering their own distinct approach to cacophony – Nagura’s barks, growls and desperately pained yelps; Shin Yokota’s free-spirited percussion, owing as much to Keith Moon’s blunt batteries as to the scattershot noise-jazz of Tatsuya Yoshida; Miyabe’s occasionally light melodic touches, thrown in to take the audience even more by surprise – but it’s their twin-pronged noise delivery that actually binds and directs them, a seething acid bath of static, feedback and squealing madness that makes ENDON one of the most intense spectacles of the night.

There’s a similarly full-on vibe from Baptists, but rather than opting for emotional and tonal brutality, they make do with overwhelming physicality and sheer, unrelenting power. While the fact that much of tonight’s crowd seems to have come for them alone helps keep the room moving, there’s no denying that Andrew Drury is one of the finest punk frontmen of the past decade, not just urging the crowd to move, sweat and get handy, but frequently diving in to show them how it’s done, Canada-style.

With a heavy emphasis on last year’s Beacon Of Faith, it’s a fine demonstration of Danny Marshall’s piercing guitarwork, ‘Indigo Child’ and ‘Capsule’ in particular showcasing a willingness to rein in the momentum while keeping the aggression flowing. A couple of classics in the form of ‘Betterment’ and ‘Think Tank Breed’ close the set in imitable fashion, Drury handing the mic to a few hardcore fans as he plunges headlong into the pit, ricocheting from body to body in a display of audience solidarity that is rare but welcome.

SUMAC’s approach is, if anything, a combination of the strongest elements of their support acts tonight, packing both the immense sonic stature of Baptists and the volatile musicianship of ENDON; their set blows the room away yet simultaneously leaving it floundering for something tangible to grasp hold of. ‘Attis’ Blade’ sets the bar high from the get-go, Nick Yacyshyn’s fluid, crushing kitwork seemingly a million miles from his steadier barrage earlier tonight with Baptists, while former ISIS mainman Aaron Turner shows that the years have only served to make his bark even more potent.

Though Turner’s voice sometimes seems like a cry of wild atavism, his guitar-work this evening is so far ahead of its time that it verges on the incomprehensible. He’s evidently learned a few tricks from 2017’s collaboration with Keiji Haino, utilising a keen sense of space and texture to craft narratives from pure sound; a subsonic pummel here, a free-jazz freakout there, sprinkle some melancholy introspection, and then throw the whole thing into a blender and watch jaws drop.

While pretty much all of tonight’s four cuts rank amongst SUMAC’s most complex material, with a mammoth 21-minute run-through of ‘The Task’ coming across as a staggering feat for band and crowd alike, the trio attack their compositions with such violent gusto that they draw everyone into the same massive sound bath that they themselves look like they’re immersed in. It’s deafening but, as a final sludgy send-off buries the crowd in squeals of feedback and a level of distortion that you can feel rattling in your teeth, it’s also immensely satisfying. Three very different bands and three very different forms of intensity have combined tonight to make a truly remarkable experience; and, judging by Turner’s humble, smiling farewell, it looks like everyone got something out of the evening apart from tinnitus.