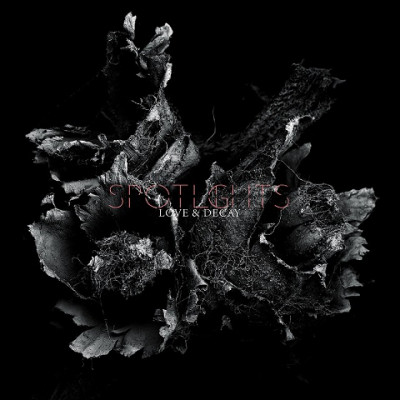 Brooklyn three piece Spotlights are back with their third album entitled Love & Decay. The partnership in love and life of Mario (guitar/vocals) and Sarah Quintero (bass/vocals) now officially joined by touring drummer Chris Enriquez. When Aaron Harris (ISIS/Palms) heard the Spotlights track ‘Walls’ he shared it with fellow Palms member and Deftones frontman, Chino Moreno. This in turn led to a tour with Deftones and shared stages with the likes of Melvins, Quicksand, Hum, Glassjaw and Pelican. Before long, Mike Patton was on the case to bring them to the Ipecac Recordings roster.

Throughout Love & Decay, the production is outstanding and even more impressive when you find out Mario handled these duties himself at his home studio. Mario explains the background to these nine songs, “The Age of Decay encapsulates everything we do on this record…The Juxtaposition about love against this backdrop of a world that can be hard to deal with. It’s tangible, it’s intense. It’s beautiful. There’s an impending darkness underneath everything and a sense of unease, but it’s also honest and vulnerable.”

For anyone familiar with their work to date, this album will definitely further heighten your affinity for Spotlights. Opener ‘Continue The Capsize’ kicks off with lightspeed guitars that shimmer and skank with a humming intensity. Ornate melody lines ping in from outer space and the sound is almighty and glorious. The heavy crunch that Mario creates is thick but crisp and the beautiful little sprightly flickering fragments of joyous melody, weave intricately around the low but dreamy vocals. What an introduction!

Earth will move if you play ‘The Particle Noise’ at high enough volume, the word seismic is almost rendered futile by the ferocity of the guitars. Yet, the song retains an extremely melodic atmosphere with Mario’s vocals layered into the mix along with more of those imperious chimes. I can’t think of any other band who can whip up this combination of ultra heavy sounds and killer melodies, ‘Far From Falling’ showcasing this technique to stunning effect. The production job throughout this album is superb and provides an incredible level of volume that is controlled but never restrained. This track comes across like Ride jamming with Jesu, up until the end which is a full-on turbo charged race to the finish with some insanely heavy guitars in tow.

‘Until The Bleeding Stops’ has some twisted riffs that spiral out of control like a juggernaut with a blown out tyre, careering off the highway. The resultant carnage of metallic shrapnel ablaze with flames arcing high into the sky, while Mario’s voice offers soothing comfort. The poppy ‘Xerox’ comes over like a heavily amped up Swervedriver if they dropped the tuning on their guitars. Wondrous melodic guitar overtones shine rays of sunshine across ‘The Age of Decay’. They are truly stunning and bring a wonderful dreamlike state to the crushing guitars that swell beneath.

Next up is ‘Mountains Are Forever’ which is dynamically more challenging, with switches in tempo and volume. As the rage develops Mario is incensed enough to change vocal style with some guttural howls. The peaks and valleys of the track reminding me very much of Bossk and their gifted way of fusing intense metal and melody. Harsh electronic beats and bleeps underpin ‘The Beauty of Forgetting’ as the anger of ‘Mountains Are Forever’ subsides. As the tension builds you sense a change and eventually those guitars are unleashed again but I find the endless riffing a little directionless and the track wanders, along with my attention. Weighing in at over ten minutes long, this is probably meant to the be the showpiece track on the album but unfortunately I enjoyed it least.

For the physical releases only, there’s a bonus song, ‘Sleepwalker’ which gets me back on track with satisfyingly heavy guitars and a wispy melodic shimmer. Mario weaves a gorgeous trance inducing melody before breaking free to ad lib some stellar melodic variations, this is the actually the finest track on the album. It transcends into something very special as the guitars layer and build at the conclusion before scorching the earth with blistering feedback and a final flurry of electronic burbles.

As I said at the outset, Spotlights fans will find much to enjoy with this album. It hits the spot with me on so many levels as I am a sucker for melody and super heavy guitars. I can only think there’s going to be a few more tours in the pipeline with established acts and it’s only a matter of time before Spotlights head out on their own as headliners. Love & Decay is an extremely accomplished collection, enhancing Spotlights back catalogue and very much worthy of your attention.