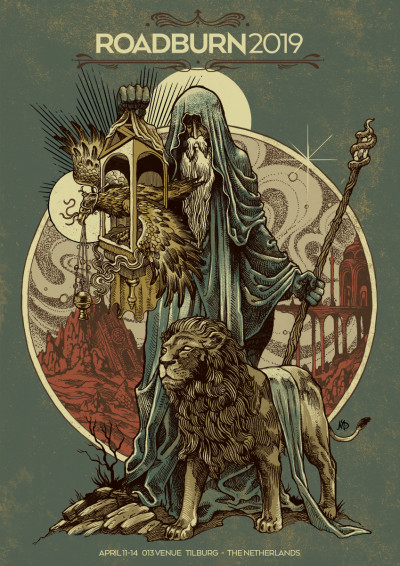 Dear Roadburn fans, I apologise for leaving this preview way too late. But what can I say? I suppose life got in the way. As the festival has long sold out, I decided to at least share some of the names with you, names of bands and artists I am definitely most excited to see this long weekend. Hopefully this will get you all even more excited too.

Firstly, it’s really exciting to see the Dutch black metal scene having such a prominent place on Saturday’s schedule, taking over the Patronaat for most of the day. This scene has steadily been growing and developing and what other festival than Roadburn to give the stage to these up-and-coming, and some already more established local acts and expose them to a wider audience. In particular I can’t wait to see Witte Wieven, whose 5 tracks that are available on the band’s Bandcamp page have been on near constant repeat over the last month or so. Laster already demonstrated their talent 2 years ago already at the Never Mind the Hype sponsored Roadburn Introduces show, and they will no doubt pull something special out of the hat this year. Of course the ferociously exciting Turia, Terzij de Horde and Dodecahedron will be must see performances as well, all leading up to the ultimate Dutch black metal showcase of the day, Maalstroom, the specially commissioned performance including members of the previously listed bands.I wouldn’t be surprised if some people won’t leave the Patronaat at all this day.

There are some really strong female performances at this year’s festival as well, something that really excited me a lot. Emma Ruth Rundle will play her own performance, but will also collaborate with artists-in-residence Thou, which my good friend Mike from Chicago recently witnessed and raved about, so this would be a definite “must see” for me. Jo Quail has been gradually building a name with her beautiful cello pieces, and she will not only accompany Mono on the big stage, but will also perform with Myrkur and At the Gates. Anna von Hausswolff and A.A. Williams will no doubt stun audiences with their beautiful music and haunting vocals. And of course, there’s GOLD, whose new album Why Aren’t You Laughing? is one of this year’s personal highlights. For the fans of the doomier side of things, I can’t recommend Bismuth highly enough. Drums, bass and a huge pile of amps combined with Tanya Byrne’s vocals will slow things down substantially, but in an amazing hypnotic and mesmerizing manner. Of course Vile Creature will be unmissable as well if you like your doom dirty and with a clear message of the current state of the world’s affairs.

Of course, I can’t write a Roadburn preview without mentioned Thou, as already said this year’s artists-in-residence. I still can’t believe missing their collaborative set with The Body last year, but it was a hard decision to either see that or see Une Misère’s surprise 3rd show of the festival. Therefore, when Thou were announced to play their part again in this year’s line-up I couldn’t be more pleased. And they will play a variety of sets which would (or perhaps should) please every Roadburner. From their acoustic set, their collaborative set with Emma Ruth Rundle, their covers set (which hopefully includes some of their Nirvana covers), or Sunday’s full force sludge set on the main stage, there really is something for everyone.

There won’t be a Roadburn without a mainstage spectacle, and this year both Heilung and Tryptikon tick that box for me. Heilung’s tribal Viking chants will be a true spectacle, not just for the ears but also for the eyes. And of course, Tryptikon playing Celtic Frost’s unfinished “Requiem” would be a memorable set as it is, but this is Roadburn we’re talking about here, so this performance will include the esteemed Dutch Metropole Orkest (orchestra) and Kobra Ensemble, which would surely make it a performance to never forget.

I’ve been a regular monthly vinyl subscriber of Holy Roar Records for nearly 3 years now and I am therefore very familiar with the label’s roster. But I’m sure many people going to Roadburn will be more unfamiliar with the label and its bands. I can guarantee that their Friday showcase day at the Hall of Fame will be more than worthwhile and has a line-up so varied that it gives a perfect representation of the label’s proud output. Secret Cutter’s grindcore, aforementioned A.A. Williams’ mesmerising vocals, Conjurer’s heavy sludge, Pijn’s post-rock/metal and Svalbard’s metallic hardcore are all more than worthwhile to watch. If you’re not familiar with any of these names I’d recommend you to give these a go if you want some nice surprises.

Last but not least, Cave In, SUMAC, Sleep, Daughters and Old Man Gloom are this year’s more established names and should therefore attract the big audiences of this year’s festival. Make sure you get their early if you want a good spot, though the Main Stage is an incredible live music space, and wherever you end up standing, it will be an unforgettable experience.

I could easily mention 99% of this year’s line-up in this preview piece, as in my opinion Roadburn doesn’t book any “bad” acts, but that completely misses the point of this feature. I haven’t focused on the traditional side programme, or the recurrent art exhibition, which might provide a great alternative if you need to give your ears a bit of rest, and certainly deserve your attention. My last advice would be this: don’t get upset when you don’t get to see a performance you had highlighted as a “must see”. Roadburn is a special place, there are some amazing people around the place for 4 days, you might walk into a room and be pleasantly surprised by a band’s show you had not heard of before. I’d argue it’s less enjoyable to follow a strict schedule and it’s more relaxed and overall a much better experience to go with the flow, see what you feel like on the day and try to get some nice surprises along the way. And make sure you give your feet a rest from time to time as well.

Oh, and get yourself a reusable Roadburn cup, which should be your first priority at the start of the festival.