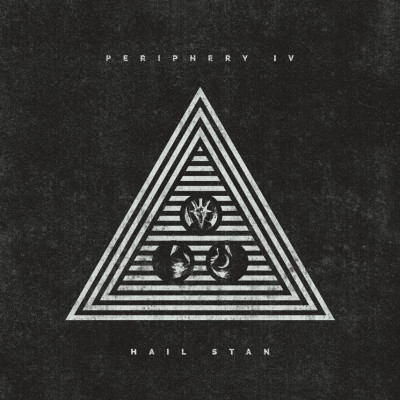 After several years of relentless touring and releases, the prolific force that is Periphery opted for a different approach with their sixth studio album. Having split with their record label Sumerian Records following the release of Periphery III: Select Difficulty in 2016, Periphery took a break from their schedule to pursue other projects and to take their time with their follow up album. For a band like Periphery who bow to no-one’s expectations, the prospect of the full creative control offered by releasing an album via their own label (3DOT Recordings) was one that they clearly relished. After a number of teasers and eventually the first single ‘Blood Eagle’ was released online, fans have been eagerly anticipating the release of the bizarrely titled Periphery IV: Hail Stan for some time now. The album’s title perhaps shows what happens when a band gains full freedom to do what they want with an album looks like (and when they have a sense of humour like Periphery’s), but the full extent of what that freedom would be like is contained in the songs themselves.

The opening song ‘Reptile’ is perhaps the epitome of this approach, as it seems incredibly unlikely that a record label would not have objected to Periphery kicking off an album with a seventeen-minute epic. There is still a real sense of familiarity to the song though, which demonstrates early that Periphery are not that inclined to deviate from their winning formula. After a soft intro, the trademark detuned guitar chugs accompanied by Matt Halpern’s powerful drumming take centre stage and make up most of the song. There is some variation within it, as lead singer Spencer Sotelo breaks out into his soaring choruses every so often and we even get treated to a guest vocal appearance from SikTh’s Mikee Goodman. All in all though, while it is an intriguing start to the record, the song lacks the ambition that such a long opener would suggest.

Following the opener is the first single from the album ‘Blood Eagle’, which is possibly the heaviest song Periphery have recorded, starting off with some heavy distortion before pounding the listener with some truly crushing riffs from the guitar triumvirate of Misha Mansoor, Jake Bowen and Mark Holcomb. After going for a slighter softer approach for Periphery III, Sotelo’s brutal guttural screams are back with a vengeance and they continue into the next song ‘CHVRCH BVRNER’, which throws some mathcore elements into the mix for a truly frantic track. Periphery do mellow out after this though, as anyone who had listened to their second single from the album ‘Garden in the Bones’ beforehand would attest to. Though there is still the familiar thudding of the percussive guitars and bass (provided by Adam “Nolly” Getgood despite his departure from the band), the vocals are much softer throughout the verses and the song as a whole balances the various elements present in Periphery’s music, as opposed to the interchanging shown previously in ‘Reptile’. The softer sentiment goes even further with ‘It Only Smiles’ which is by far the poppiest thing the band has ever done, yet is surprisingly effective and memorable and even compromises a full choir at one point in the song.

Periphery are consistently predictable in their unpredictability and Hail Stan perhaps unsurprisingly, given the production history of the record, is undoubtedly their most varied record to date. The electronic and pop sensibilities continue to be present through songs like the infectious ‘Crush’, whereas the dark and heavy riffs are omnipresent through tracks such as ‘Follow Your Ghost’ and ‘Sentient Glow’; the latter of which may be familiar to any fans of Mansoor and Holcomb’s side project Haunted Shores. All the while throughout the musicianship and production is first-rate and it is arguably Sotelo’s best vocal performance on any of Periphery’s albums. The album closes out with the emotion-driven ‘Satellites’, which marks a very fitting ending to a highly interesting record. There is very little here for anyone not already a fan of the band, and among fans of the band it is likely to receive a mixed response. It appeared to get better with every listen, which is an enormous positive but it falls slightly short of being Periphery’s best record due to the lack of a song like ‘Scarlet’ or ‘Alpha’ that truly stands above the rest and sticks with you after the album has finished. Nevertheless, it is a real triumph for Periphery and continued proof that even after six albums they are still one of the most exciting metal bands around.