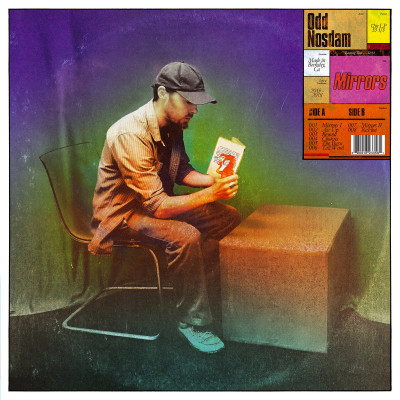 New one from pioneering abstract hip-hop producer and Anticon cofounder, Odd Nosdam. Mirrors is a woozy dreamscape of colours and textures buoyed along on slow burn, head nodding beats. Which is what he does, pretty much. It didn’t take him long to find his interests lay more in the instrumental possibilities of hip hop as sound collage and he’s spent 20 plus years exploring them as an experimental approach to music making. He’s been loads more ambient and more abstract before now but Mirrors is a focused application of his well honed skills. It’s also a crate digging record.

It’s probably not a surprise to anyone that he’s a nerd about it. Built from found sounds, mostly lifted from rare and private press vinyl Mirrors splits into A and B sides designed particularly for the vinyl album format. The artwork even incorporates the distinctive hazy circle of sleeve rub that blooms in the darkness on record covers stored together. This is kind of interesting and it sets some parameters for his approach but the idea might be important, might even be the most noteworthy thing about the project is a little nauseating. Like he’d made an album for M&S; “This is not just any ambient 90’s trip hop flashback, this is carefully sourced from rare and private press albums you’ve never even guessed at you pleb, designed by experts for a rounded listening experience, delicately hand finished by artisans, immerse yourself…” As I said, we shouldn’t be surprised. Odd Nosdam has long had a love affair with the vagaries of formats, his previous album Sisters even getting a release on VHS. Talk about putting the anal into analogue. Here in the 21st Century I’m reviewing it from a clutch of digital files. So it goes.

Side A starts with the calming sound of waves which wash up a beat and rising expectation. ‘Air Up’ brings a shot more menace. Smudged but tougher beats and a looping organ part that elegantly threads through the track. Perhaps the most soundtrack like moment here, there’s a sense that something is coming but you don’t know what it is yet. It gives way to the waves that come and go linking the tracks, sometimes rolling right through them. Wave sounds and rainfall are common to music for meditation and relaxation and it’s possible such a recording is their source here. They provide a constant and reassuring hum that blankets other sounds. There is an argument that the reason some people insist vinyl “just sounds better” but can’t explain why, despite the science, is that the surface noise works in a similar way. Vinyl’s fetishised ‘warmth’ is merely the distant rub of needle on plastic. But that’s none of my business *sips tea*.

Waves wash through the brief ‘Beyond’, a watery dub space of further submerged beats that introduces the recurring high end ping of a meditation bell. Bells and beats twinkle and ascend in ‘Cookies’ the clear stand out cut of side A. It’s the most independent, the other tracks being, as intended, much more like short sections of a suite. Its final part ‘Tall Wind’ ramps up the general wooziness, rolling backwards over deep sunk and scattered beats. Eventually carried away on the waves it ends on some cod classical strings and piano like a TV ident or closedown.

Split into just two long tracks Side B is the more successful of the two. ‘Mirrors II’ takes the miniatures of the first side and gets epic and widescreen with them. A steady beat and the roll of waves underpin a dense and shifting soundscape, layer on layer of sound washing up over you. It’s too dense to really take in but never oppressive, it allows you to move your focus around within it on repeat listens. It quiets briefly to a rain storm and a harp. Remarkably he seems to throw more and more into the mix here without it ever getting too ridiculous or clogged. There’s even a church bell at the end as it dissolves once more to rain and tinkling windchimes (windchimes!). ‘Re:Flect’ finally abandons the supportive structure of the beat and floats free, an ambient pool of sound. There’s a slightly distorting disquiet in the back of it, behind the surface sense of calm. Perhaps this is what he means by Mirrors, it offers up different readings or experiences based on the listener.

In recent years youtube has become home to the phenomenon of Lo Fi Hip Hop beats to relax/study to. Anime loops and a soft steady soundtrack of chilled out beats. People seem to love it. This is possibly the sort of thing I imagined it to be, but I had never checked it out. So I did. The comparison was not kind. It sounded sappy and thin, generic, limited. If this is hip hop as lounge music (and I do not mean that as a diss) Odd Nosdam is definitely the rich, creamy, full fat artisan version. The M&S luxury version. Widescreen surround sound to, well, laptop speaker youtube streams. Esquivel to Mantovani. Exploratory space age lounge hop to algorithmic muzak.