(((O))) Interview: Nelecc: Gazing at the Stars in Kenya 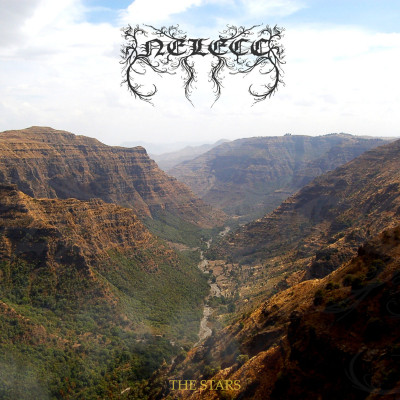 The cover art is a picture of lower Rift Valley. Going to places like these as a child always took my breath away. I was always in awe of the enormity of it all. The peace, the cool breeze, the chirping birds, flowing streams, falling water... It is a place to become. And that is why nature is my greatest influence.

Africa is the final frontier when it comes to metal, but something is definitely brewing with bands like Nelecc from Kenya, creating their very own brand of atmospheric black metal. But the local scene is small and mostly unknown, yet this gives it a unique flavor.

Kenya has been a country with a moving history, but has also offered a relatively stable breeding ground for musicians. Unsurprisingly, this also has created bonds across boundaries and the one-man band Nelecc has seen new ties, as the artist, Nelecc himself has joined forces with Victor Rosewrath from Vale of Amonition (Uganda) and Noktal from Djibouti in the band Krummholz.

Also, he was kind enough to tell us some more about his music and vision.

E&D: Hello, how is Nelecc doing?

Nelecc is doing great, thank you. 2018 was quite the year and I am happy with how it went in terms of music.

E&D: How did you get started with Nelecc and what does the name mean?

The idea of Nelecc was started while I was in high school. I had a strong will to make music, and get lost in it. Since Nelecc is part nature, part personal life experiences, and part fantastical themes, I decided to mix the real with the ethereal. Hence, the Nel(son)ecc(lesiastes).

E&D: Which music inspired you to pursue the path of black metal with your own project and did you have any previous projects or bands you were active in?

There is a lot of different music (even different genres) that inspired me to do black metal. I initially wanted to form a black metal band, but was not able to due to the fact that I grew up in a very remote town with barely four metalheads, and a really bad music scene. Since I was so far away from Nairobi, and couldn’t get in contact with the big city metalheads because of my high school, teen years shyness, I decided to just do it by myself. I hadn’t wrapped my head around the concept of having a solo project, but it grew on me faster than I expected. In Africa, the two bands that have influenced me to do black metal are: Absence of Light, and Wildernessking.

E&D: Can you share with us what sort of theme, message or idea you try to convey with Nelecc?

The themes are: Nature, personal life experiences, and fantasy. It is a blend of the three really. Like some sort of tale, but not really one, haha.

E&D: You’ve recently released the record The Stars with Nelecc. A concept album it seems with a story to tell. Can you share what the story is on the record?

Opening: The Stars – This is practically an intro to the album, and the journey of a guy who seeks another world far from, yet in within this one. The other remaining tracks take you through a fantasy world, my world, and the natural world.

E&D: What was the process like of writing and recording the record?

Writing and recording the album was tedious considering how much I had to learn (and what I’m yet to learn) about mixing and mastering. But, as it didn’t seem to be sounding too good, Mike L. of Sojourner continually gave me incredibly important tips on how to get a much better mix. It was incredibly helpful for that process, and definitely boosted the release.

E&D: On the cover of your record The Stars you show, what I believe to be, a Kenyan landscape. The content of the lyrics is also referring to places and is partly in the native language. How important is your origin for your music?

The cover art is a picture of lower Rift Valley. Going to places like these as a child always took my breath away. I was always in awe of the enormity of it all. The peace, the cool breeze, the chirping birds, flowing streams, falling water… It is a place to become. And that is why nature is my greatest influence. Growing up in a small town surrounded by the wilderness definitely helped it. So, it is important how or where the ideas generate for one to come up with a project.

E&D: Would you say your music could be created anywhere else than in Kenya?

I believe music can be created anywhere (even Antarctica). It’s universal. Where you draw your inspirations from is what is really important.

E&D: Can you tell me if there is a black metal scene or metal scene in your country and how it started, which bands are important and where it is happening?

The main metal scene is in the capital city, Nairobi. There is a blackened death metal band that I mentioned earlier, who also influenced me to carry forth with black metal; Absence of Light. They have a full-length record out from 2013 (Vyom Chakra) and it’s absolutely magnificent.

E&D: Are there any bands you’d like to recommend from Kenya or neighbouring countries?

I’d recommend my friend, and bandmate’s band, Vale of Amonition (doom metal, Uganda). Some other good bands from Kenya would be The Seeds of Datura (doom), Last Year’s Tragedy (melodic metalcore), In Oath (deathcore), and Mortal Soul (metalcore).

E&D: You’ve recently released a joint record with Krummholze, an international East-African project with Victor Rosewrath from Vale of Amonition from Uganda and drummer Noktal. How did this come into being?

It was pretty simple really, and a more than a pleasant surprise. Victor Rosewrath messaged me and proposed to start a band together with Noktal, since they had been acquainted before. As soon as I saw the vision that Noktal had for the soon-to-be band, I was immediately interested. So we joined forces and formed Krummholz.

E&D: Can you give me some background on Noktal, I can’t find anything as for where he is from, in which band he played etc.?

Noktal is from Djibouti, but he’s currently in the US. He’s been in multiple bands before, but he can provide more insight on that than I can.

E&D: Krummholz seems to have rapidly become your main focus. How does it relate to your Nelecc project and how did you get in touch with Naturmacht Productions, a fantastic label in my opinion?

Well, it would be a bit of a stretch to say that I have a main focus quite honestly. This is because you never know when inspiration is going to strike. So most times, I’ll find myself writing for Krummholz and Nelecc back and forth. Victor was able to get in touch in me because of my work in Nelecc, so there will always be a little bit of Nelecc in Krummholz: not in the sound, not in the lyrics, not in the themes, but in spirit.

Robert, of Naturmacht reached out to us and said that he really liked our sound and offered us a deal. It’s a great label, and we were thrilled to sign with him. The roster is incredible, and the commitment to his artists is real.

E&D: What future plans do you have for Nelecc and for Krummholz?

Writing and recording for the new Nelecc album that I’m hoping to release this year is more than halfway done, and the writing process for the debut Krummholz FL album is currently underway. We can’t wait to show everyone what we are brewing when it’s done.

E&D: If you had to compare Nelecc to a dish, a type of food, what would it be and why?