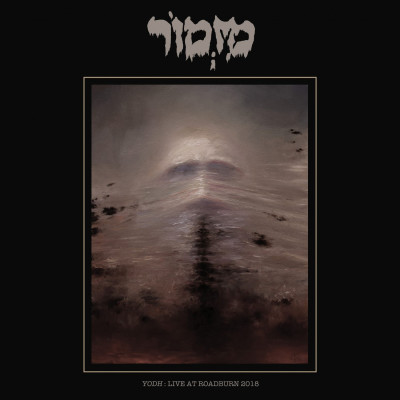 Yodh: Live at Roadburn 2018 by Mizmor

The live album is always an interesting proposition, a staple of heavy music that’s ordinariness obscures the strangeness of listening to a recording of a performance of a recording of a performance. It used to be wildly rare to discover a live recording of a show you’d actually been at, but over the last few years I’ve happily picked up a growing pile of tape releases of concerts featuring myself in the audience as a bit part. But even if you have firsthand experience of the event in question, you wonder whether something of the smoky magic of the live atmosphere will be captured; or whether listening outside of that context won’t stand up in the light of day and you’d be better off returning to the studio version. And of course there’s the question of whether the recording itself will be of decent enough quality- on one hand, even some soundboard recordings can be a bit muddy since the mix was designed for the room not the tape; and on the other hand some lose a bit when there isn’t anything in evidence of the crowd- like the Atari Teenage Riot at Brixton Academy 1999 album, which represents the sound the band made but not the bottle-chucking rage of the listeners. Anyway, all preamble anxieties can be merrily abandoned given that the two words ‘at Roadburn’ after the ‘Live’ mean that you know the sound recording will be of the highest quality and that the set itself will be sufficiently excellent to have been selected for release. And so it is for Mizmor Live at Roadburn 2018.

The album opens, or rather lurks into view, with a rasping croak that’s so slurred, guttural and drawnout that it approaches the sound of a bowed double bass. Then a classic slow four drumstick beats herald the imminent drop of a heavy weight of fast-paced sludge of ‘Woe Regains My Substance’. The floor shifts again and there’s a floating riffclanging doom passage and ghostly echo vocals and then another headblurring speeding mass. ‘A Semblance Waning’ begins with its very few first notes calling up ‘Nothing Else Matters’, quickly dispelled in its acoustic gentle, even pastoral lyricism. This wraps up as a sort of prelude, and while we continue quiet and undistorted, the bass hints at darker hues to come. Like the first track there’s a lit fuse in clear evidence, this time a feedback tzzzzzeeeooo gaining in volume until a snarly crash, doom riffs accompanying the kind of vocals that make me think of Abbath doing a crabwalk around a forest.  It can only be underlined that the sound is great, centring around the blissfully blistering guitar sound of the very-loud-live rendered in high quality recording, and creating a deep resonant field for this evocative doomed black metal hybrid. In addition to this, the diversity and distinctiveness of the vocals creates such an evocative feel, from cackling goblin to classic screeches and especially those horror croaks.

‘A Serpent Eats its Tail’ also begins with bassy picking and plinking for two minutes (an unnamed artist who contributes a good smoker’s cough midway!) before another widescreen roar. This one makes good use of pace and space to let the final notes of each cycle hang and decay. ‘Inertia, an Ill Compeller’ erupts, with a slow-clicking drumstick counting in an immediate pile-up snarl of doomy distortion and blackened hollow vocals, reminiscent of Bell Witch’s set on the same stage at the same fest, the same echoing into the void sluggish wretchery. ‘Bask in the Lingering’ is a fitting finale, with shrieking about “my tortured soul” and being aliiiive or just about, the crowd waiting to hear the very last note dissolve into fizzing slime before making their appreciation heard.

One of the characteristics of the festival in general is that you see things that you really don’t expect to come out before dark… Tyranny or Fell Voices in broad daylight for example. The main stage and smaller bars are tucked away from windows and vampire-safe, but the iconic converted-church-outbuilding Patronaat stage and newer addition Koepelhal do let the daylight in. The former it creeps in through deconsecrated stained glass, but in the latter- where this set took place- it’s a more dusty hushed light of a more industrial kind of cathedral, a repurposed warehouse by overgrown railway sidings, with a vast curved roof. Each in their way, the abandoned halls of religion and work, provides an intriguing setting for the noises that reinhabit them, for music which seemingly against prevailing public opinion, knows that the apocalypse has already taken place. All of which won’t matter much perhaps to those coming to this record acquainted with the band but not the event: suffice to say this hour slab of blackened doom will darken your day and righteously attest to the end of the world.