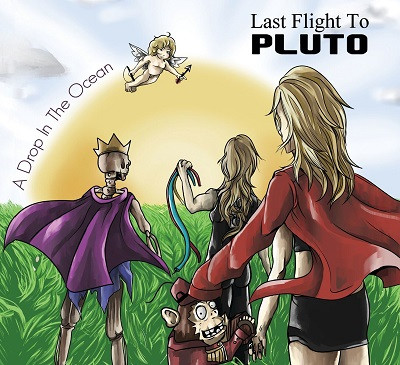 A Drop in the Ocean by Last Flight to Pluto

“Tell me what I must do/My purpose is to serve you/I am Masheena!” The line sung by Alice Freya from the opening title-track by Last Flight to Pluto’s new album, A Drop in the Ocean. It showcases a different themes that tackles the subjects between Love, Action, Survival, Corruption, and saving the world. This is a band that really captures to bring the spirit of real good combinations between music and art to life.

Released via White Knight Music, A Drop in the Ocean is Last Flight to Pluto’s follow up to their 2015 debut, See You at the End. The album was recorded at Oakwood Church Studios in their hometown of South Wales under the stewardship of Nick Lloyd. And with a little help from keyboardist Rob Reed, founder of both Magenta and the record label, White Knight Music, and featuring Ezra drummer Daz Joseph on the album, they lend this up-and-coming band, a big gigantic amount of support.

While I’m new to the band’s music, A Drop in the Ocean is the adventure that you’re about to embark on. This is like something straight out of the stories that is beyond the DC and Marvel universe. It’s almost as if Alice had written these songs done in an illustration from the Comic Book format by honoring Gail Simone, Arjen “Anthony” Lucassen, and the late great Stan “The Man” Lee.

You know this may sound funny, but the name of the band’s second album is their nod to Nektar’s 1972 classic, A Tab in the Ocean. Now the sound of Last Flight to Pluto’s music is a cross between Styx’s Paradise Theater, Yes’ Drama, Rush, Delain, and bits of the futuristic sound of Steven Wilson with an ‘80s pop flavor.

‘Morning Glow’ sees the band channeling this soaring rocking ride back home from Earth by seeing the sun coming up towards the horizon with its mid-fast paced crunch that honors Queen meets Ra Ra Riot’s The Rhumb Line-era while the last 2 minutes becomes this cross over between Acoustic Folk and Baroque Pop. You could hear some of that sound with an AOR twist to really get you going and moving away from your troubles by starting a new life and singing in the style of Morrissey’s ‘First of the Gang to Die’ with a twist throughout the rhythm section and the singing structures that Alicia does.

‘The Kings are Dead’ has this eerie 8-bit Nintendo video game intro on the keyboards that sets the jump to hyperspace with some arpeggiated guitar and intensive bass lines by Jay Lewis Kreft. Joseph’s drumming heads into some trip-hop textures before the guitars come kicking the door down with a gigantic battering ram as Jack Parry and Ryan Barnard channel the maestro himself, Boston’s Tom Scholz.

Alice’s vocals then heads towards into an underwater city with some Floydian-sque lines that raises the bar up before going back into some virtuosic improvisations once more. ‘Time & Love’ features this Radiohead-like intro, Pat Benatar riffs, and then into this mellowing turned heavier sound to give Joseph’s drumming sound like a machine gun.

This gives Alice a chance to spread her wings once more. The background setting has this ghost town vibration as if a pin had suddenly dropped unexpectedly at the right moment at the right time by driving down the deserted highway of finding peace and hope in their own lives. I have listened to A Drop in the Ocean about four times now. I have to say this, Last Flight of Pluto are the band you really need to be on the look-out for. And I hope they got more surprises underneath their sleeves to keep the machinery going more and more.

Stan Lee once said, “The only advice anybody can give is, if you wanna be a writer, keep writing. And read all you can, read everything.” And that’s what Last Flight to Pluto have done. They in my opinion, have done enough research, wrote the arrangements and compositions, and I can quite imagine them  reading some of the superhero stories from both DC and Marvel by bringing A Drop in the Ocean to life.