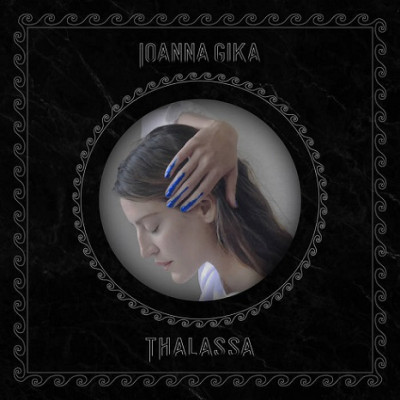 Ioanna Gika is the latest artist to join the ever expanding lineage of greatness that comes from Sargent House. Debut album Thalassa takes its name from the primeval spirit of the sea. Ioanna is of Greek heritage (via the US) and this self-produced collection was written in Greece during a tumultuous time caused by the loss of loved ones. Describing the inspiration for the album Ioanna explains “A series of deaths drew me home to Greece. The city of childhood memories was in despair. I drove past painted swastikas towards burial sites. I said goodbyes and grieved for those I didn’t get to say goodbye to. ‘Thalassa’ is about going through change that is unwanted yet unstoppable.”

By way of influence, the press release lists Weyes Blood (who I‘m not familiar with but hope to be soon), Myrkur and Zola Jesus (I’ve been known to dabble) as primary sources. Recorded between Athens and California, Leopold Ross (Composer, Black Mirror) and Hugo Nicholson (Radiohead, Primal Scream) provide additional collaborative input. Finally, the album has been given it’s beautiful sheen by Heba Kadry (Bjork, Beach House). The press release doesn’t lie when it declares that “Gika sets herself apart with a sound that weaves darkness and light, the heavy and the sublime, the ancient and the modern”. It should also be known that Ioanna has provided original music to several films and was shortlisted by the academy for her original song ‘Gone’ in Snow White and The Huntsman.

So now we know a little bit more about Ioanna, what of the music? Well, it’s a unique talent to merge the opposing genres of folk and electronica in the way that Ioanna has. The aforementioned blend of ancient and modern is most intriguing and sounds completely natural. Opener ‘Roseate’ begins as a beautiful folk ballad before hyper shifting into a futuristic electro soundscape of seismic thuds, bass rumbles and sampled soprano shrieks. Alternating effortlessly between the folk and electro elements, eventually the two merge with a sumptuous melody at the finale, over a furious rush of pounding beats and exquisite electronica.

The slippery beats, warm synths and Ioanna’s spine tingling melodies are elegiac and memorable on ‘Out of Focus’. Initially, it’s reminiscent of Sargent House’s other leading talent, Chelsea Wolfe, but repeated listens actually shifts you away from that thought as Ioanna is generating her own unique sound. There’s a special moment when brass instruments parp into the mix, that is truly glorious and shows an adept ability at understanding exactly how to create perfect arrangements.

I’m reluctant to pitch an Enya comparison into this review, but the opening moments of ‘Thalassa’ do recall the Irish singer’s finest moments. After what sounds like a wheezing donkey carries Enya away, the song leaps into electronic atmospherics again while Ioanna tenderly purveys a haunting folk melody, her voice pure and stunning. By the end of the track, the transformation into full blown electro-orchestral epic instrumentation has you wondering how the hell you got there.

The centrepiece all-out highlight of the album is the magnificent ‘Swan’, which has one of the most gorgeous choruses I have ever heard. It is heart-breaking and intensely uplifting at the same time and the instrumentation envelopes Ioanna’s wondrous vocals with a warm embrace. The attention to detail in the creation of the sounds on this song is exceptional and with every listen, new and unexpected elements mesmerise. After the perfect high of ‘Swan’ the ghostly ‘Weathervane’ allows Ioanna to pay tribute to another fine Irish singer, Sinead O’Connor. The percussion fades into the mix to allow lush synths tones and strings to sway back and forth creating a beautiful soundscape.

Based on a bedrock of pizzicato strings a la ‘Burn The Witch’ Ioanna channels a Radiohead influence with a scalpel on ‘New Geometry’. The surging bass line and propulsive beats make for one of the heavier/rockier tracks on the album, which I have to say is a serious departure for Sargent House, albeit Cathy’s ear for exceptional talent is as ever, absolutely on point. On ‘No Matter What’ the electro synths remain in the background to allow a tub thumper of a beat to drive the song while Ioanna weaves a haunting melancholic melody, making for an intense and dark gothic song.

If Portishead still made music, the robust ‘Ammonite’ might be where they would be headed, combining harsh electro beats, heavy bass and strings, Ioanna altering her voice to such an extent that it could actually be Beth Gibbons herself. Ending this incredible album is the shimmering ‘Drifting’ which features some joyous twinkles that arc over the simple yet effective instrumentation like tiny shooting stars. The last sounds you hear is a fading piano reluctantly letting go as Ioanna is left on her own to sing with tragic emotion “too far from the shore”, then silence…

My previous musical experience with Greek artists has been limited to the guilty pleasure that is Nana Mouskouri. There are similarities here though, as Ioanna has a stunning voice that is pure and natural that ably soars to stupendous heights. When you also factor in that Gika self-produced this album it adds to her considerable talent. Thalassa is a thoroughly engaging album of sublime arrangements that points towards a very bright future. It is an absolute certainty to be settling into those album of the year top 10s, come the end of the year. A stunning debut from a remarkable emerging talent.