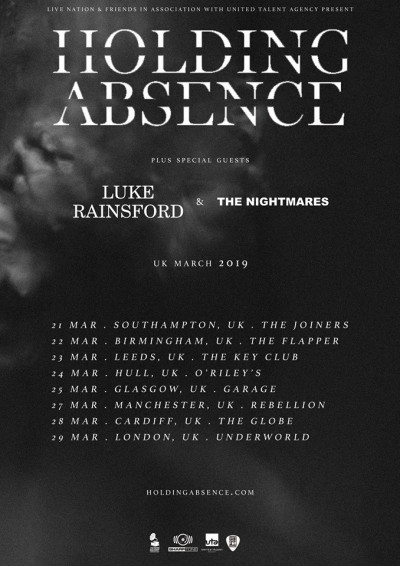 Holding Absence at The Underworld Camden

At only a quarter of the way through the year, 2019 is already shaping up to be a formative year for Holding Absence. After a lengthy recording period and a great deal of anticipation from fans, the post-hardcore five-piece from Cardiff released their eponymous debut album at the start of the year to widespread acclaim, and immediately embarked on a UK tour, culminating in a performance at Camden’s Underworld – their first ever headline show in London. The band’s emotionally charged lyrics coupled with an ambient blend of various influences and styles have given them a dedicated following since their inception, four years ago; and this has given them a solid base from which they can grow into one of the UK’s biggest up-and-comers. Given the context behind this show, it is no understatement to say that this could be a career-defining performance with the eyes and ears of not just adoring fans, but also a large part of the alternative music media, on them.

The night was opened by fellow Welshmen, The Nightmares. The post-punk quartet come out to a wall of smoke and proceed to play through their thirty-minute synth-based set. Although The Nightmares’ performance was incredibly atmospheric, it was completely lacking in energy. This would not necessarily be a problem on another night, but with the support slot that they had, they failed to make any real impression on the crowd – a problem which was exacerbated  by an early start that meant the band were playing to a half-empty venue. They deserve credit for pressing on with their show regardless, and the performance was certainly not without merit as they have clearly crafted their sound very well; but as a performance it left a lot to be desired, and they are unlikely to be remembered by many.

Birmingham-based Singer-songwriter Luke Rainsford was up next, and despite often performing solo he had a band with him this evening, as well as an impressive number of fans throughout the now augmented audience. Rainsford is a performer who really does put his heart and soul into his shows, and the presence of a backing band beefing up his sound went a long way to increasing the impact of the songs. His attempts to give every song his all do sometimes detract from his undeniable vocal and musical abilities however, which is a bit of a shame, but overall does not spoil the performance. Rainsford was also somewhat hindered due to the fact that his much poppier style than the headliners resulted in a lot of disinterest from large portions of the assembled crowd. Again though, the fact that a large number of people were clearly fans still led to a decent atmosphere, and it was also noticeable a fair few were won over by him.

The excitement was palpable for the arrival of the main act of the evening. This was Holding Absence’s show and this was evident from the synth-laden intro to ‘Perish’, the first song off of their eponymous debut album. From the moment the band kicks into life, the energy and emotion is at the highest possible level with the intimate setting of the Underworld serving only to add to the experience. They up the ante further with the powerful, albeit undoubtedly clichéd ‘Your Love (Has Ruined My Life)’, which allows vocalist Lucas Woodland to show off his best screams for everyone to hear, despite the best efforts of the crowd to drown him out by screaming even louder. He demonstrates versatility in his singing ability in the next track ‘Monochrome’ too, which again feels as though not a single person is exempt from singing along to. Anybody who had been given an audio recording of this show might be fooled into thinking that Holding Absence had been around for years. They are an incredibly tight unit, with drummer Ashley Green providing the main thrust of this with a flawlessly powerful performance from which the rest of the band followed. This is supplemented by the bass work of James Joseph, which means that the high-energy, ambient sound of Holding Absence does not fall flat in a live setting.

Experiencing the band live however, gives a very different impression – you can tell that this is a band of youthful energy. The scene is one of pure chaos at the front of the room, with fans exploiting the lack of a barrier to climb on stage with the band and throw themselves into the crowd below at regular intervals. Guitarists Olly Meager and Feisal El-Khazragi are both balls of energy making maximum use of the limited space available onstage, while Woodland is able to balance the endearment which is needed for such emotional lyrics with ensuring that the crowd’s energy does not drop throughout the hour-long show. There is one exception to this however, which is when the rest of the band take a break and bring a keyboard out for Woodland to perform a solo version of ‘Marigold’. This is a beautiful moment where again the London crowd show their devotion to the band. It is incredible to witness how well-known and loved such a new band on the scene can make themselves so quickly through their talent and genuine relatability. After this, they save the best for last with ‘Like a Shadow’, which gets the audience moving again, and they close the show with their single ‘Penance’. The only downside is that due to their lack of a back catalogue, they were not on for longer. Holding Absence duly delivered on one of the biggest nights of their career thus far, wonderfully fusing the dynamic power of hardcore with beautiful melodic emotion. They are one of the most exciting bands breaking through the British alternative scene right now, and they will have many more nights like this to come.