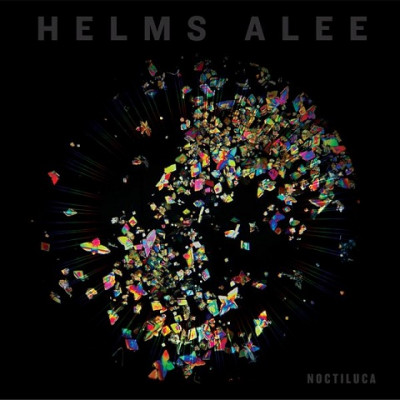 Continuing the tradition of exceptional bands from Seattle, Helms Alee are back with their fifth album in a twelve year existence. Entitled Noctiluca, the 10 tracks contained therein joyously bring you more of their trademark blend of sludgy riffs, off kilter melodies and noisy experimentation that sets Helms Alee on a parapet of unique greatness. The trio of Dana James (bass, vocals), Hozoji Margullis (drums, vocals) and Ben Verellen (guitar, vocals) combine effortlessly to create an astonishing eruption of noise underpinned with sublime melody.

Noctiluca is a bioluminescent marine algae that glows when excited. For most of us, a conventional lamp would reside next to our beds, but Hozoji kept a beaker of Noctiluca beside her nocturnal resting place. So the marine theme that has featured on previous Helms Alee albums is maintained, succinctly put in the press release which describes “the marine reference is perhaps the closest approximation to their sound: mysterious, magical and providing light in the darkness”.

Once those familiar droning guitars and heftily pounded drums crank into life on opener ‘Interachnid’, you’re so glad to have Helms Alee back in your life. This is the sound of a band agitated and fired up as ever, with just the right amount of noise and melody and a percussive groove that sounds like ten Tommy Lee sized drum kits rolling down a large mountain. The appropriately named ‘Beat Up’ is akin to being boxed by a heavyweight champion who is hollering into your face stacked insults, while your features turn to a bloody pulp. The only saving grace to be found is his female companion who interjects with her own line of deprecation before you drop to the floor in bits.

Just when you thought those mighty drums had reached a zenith of explosive ear pounding, along comes ‘Play Dead’ to destroy that notion. The first big melody moment of the album comes flinging out of the speakers at you and it’s just then that you realise there is no other band on the planet like Helms Alee. This collision of intense volume, primal and brutal, with wondrous off kilter melodies is ultimately a car crash, you are drawn into the nightmarish scene, though you really don’t want to be.

If Pixies plundered a more metallic sound and Dave Lovering’s arms were replaced with jackhammers I like to think ‘Be Rad Tomorrow’ would be close to what this might sound like. The rumbling bass lines create a sublime groove for Dana and Hozoji’s voices to tease out a wickedly infectious monotone melody. Ben slips out some beautiful guitar lines during the album’s first big highlight and the song grows increasingly widescreen over it’s six minute length. With a fake ending thrown in for good measure, the rippling guitars at the death of the song are delightful as Hozoji settles down for a nap, as only she knows how. Only to be woken up abruptly and kicking off with a gargantuan beat that heralds the arrival of ‘Lay Waste, Child’, an evil clattering shitkicker of a track that makes your earbuds pop out of your ears, such is the physical energy being generated through this beastly sound.

Underneath the thunderous drums and slippery guitars of ‘Illegal Guardian’ you can hear a piano trying to escape from the taut retention of the aforementioned. The tension is heightened by droning guitars and an onslaught of tumbling drums before Ben menacingly unleashes some of his demonic utterings. ‘Spider Jar’ features a swirling psychedelic guitar line and has a stomping juggernaut of a groove. As the glorious chorus with sumptuous strings swings in from nowhere it’s a beautiful thing indeed. The combined voices are akin to REM’s lovely harmonies and this might be down to the choice of producer/engineer, Sam Bell, who has previously worked with Atlanta’s finest.

There’s a bizarre creepiness to ‘Pleasure Torture’ where Dana/Hozoji implores us to “Open Wide” over the twangiest guitars this side of the late Dick Dale’s back catalogue. As the guitars crank up like manic drills you find yourself gripping the chair. Heart breaking melodies combined with soaring strings is not something you might associate with Helms Alee, well, here’s ‘Pandemic’ to check that box. The guitars ring out a wonderful melancholic siren in between the fabulous moments that constitute the verses. Echoes of the sirens in ‘Pandemic’ linger on as the backdrop to the final spleen venter that is ‘Word Problem’, as if to dismantle any notion that Helms Alee have gone soft, this song is another guttural blaster. Try keeping up with Hozoji’s drum pattern that is anchored down by Dana’s simple two note bass groove while Ben gives it one final heave-ho.

After five albums and numerous EP’s, Helms Alee continue to bring a powerful concoction of noise and melody that will confuse, confound, and convince you that one of Sargent House’s best kept secrets are an absolute treasure. The press release for the album defiantly proclaims that things are going to change with the release of this album. I’m not so sure that this will be entirely the case. Helms Alee are an acquired taste, but once you have acquired that taste, there is absolutely no turning away. With Noctiluca, the trio have served up yet another excellent selection of melody and mayhem. 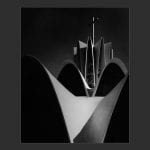