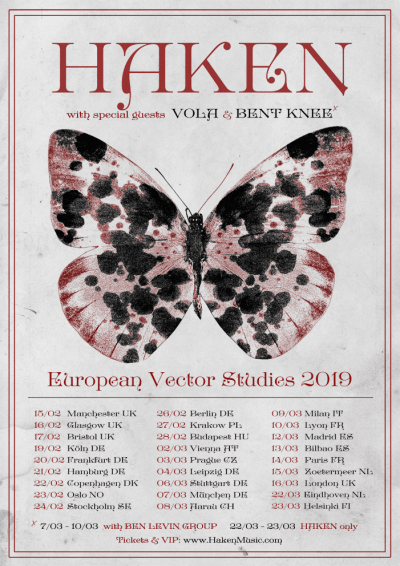 Britain’s progressive metal scene has had a number of rising stars in recent years, but perhaps none more so than Haken. The six-piece from London marked the end of the UK leg of their European tour with a homecoming following the release of their fifth studio album Vector in October, last year. Vector was received with a great deal of praise from both critics and fans, which is a particularly impressive feat given the success of their prior release Affinity. The sharp rise in the band’s popularity is demonstrated by the fact that this tour has seen them moving up to bigger venues (not to mention selling them out), such as tonight’s location at the Islington Assembly Hall.

A band who were perhaps less expectant to be on such a stage were Boston’s Bent Knee, who could barely fit on the stage with six musicians and all of Haken’s gear. Though they have released four studio albums to date, they have not yet broken through in the UK; and it was clear that they were unknown to most of the crowd who had gathered at this early stage of the evening. It seems incredibly unlikely that every such person was not fully won over by the Americans. They were terrific fun from start to finish, even managing to get a conga line started during one of their songs. Moreover, their genre-defying art/avant-garde rock was definitely a huge hit with the audience who responded with the utmost enthusiasm. Lead singer Courtney Swain’s distinctive voice and incredible range set the tone for the performance and rounded off a refreshing style which pushed boundaries while refraining from losing the crowd in a sea of ineffective experimenting. Bent Knee were an incredibly pleasant surprise to open the evening and firmly put the audience in a good mood.

Copenhagen’s Vola are far more like what the crowd would be used to hearing, and indeed they noticeably had fans of theirs scattered throughout the now mostly full venue. They are a much heavier outfit than Bent Knee, though they still throw elements from other genres into their songs too, particularly with keyboardist Martin Werner, who is back with the band tonight after sitting out most of the UK tour due to personal commitments. Through their intricate polyrhythms and crushing riffs, Vola manage to be both heavy and catchy in equal measure. What they lack in the quirkiness of Bent Knee before them they make up for in their musicianship and structural approach to their live songs. Frontman Asger Mygind’s vocal dexterity is admirable, and as he announces their final song ‘Stray the Skies’, there is an incredibly warm response  to the Danes.

Under usual circumstances, support acts such as these might be tough to follow, but then again this is Haken we’re talking about. By the time the five musicians take to the stage to the ‘William Tell Overture’, of all things, and start things off with the intro song ‘Clear’ from their new album Vector, the crowd is fully expectant and ready to engage when the music transitions into ‘The Good Doctor’, upon which lead singer Ross Jennings is met with a tremendous roar. From the moment he starts singing, it is clear that Haken will not be upstaged by anybody. The first single from Vector is performed with a phenomenal amount of energy and precision which brings the crowd fully to life. The intensity continues with ‘Puzzle Box’ which is a song that is both technical and dynamic; neither element of which is at all sacrificed in the performance.

Haken opt for a lot of their lengthier songs tonight, with only ten songs comprising their 90-minute set-list in total, safe in the knowledge that their fans would not mind at all. The best thing about this decision is that it gives everybody in the band numerous opportunities to show off. Drummer Raymond Hearne and bassist Conner Green lock together superbly to keep the music flowing; keyboardist Diego Tejeida is a bundle of energy and aggression, repeatedly coming front and centre with his keytar and engaging the crowd; guitarists Richard Henshall and Charlie Griffiths are on immaculate form trading complicated riffs and solos which the crowd lap up every minute of. Nowhere is this extraordinary musicianship which Haken have built their reputation on better exemplified than in the instrumental ‘Nil by Mouth’ from the Vector album. The crowd barely has time to digest this before they segue into another highlight ‘1985’ from 2016’s Affinity. The performance of this track shows another side to Haken which they have sometimes lacked in the past: Jennings is in his element here, adopting the neon glasses that have become a staple of this part of their live set, he not only demonstrates his fantastic vocal ability, but also what a compelling frontman he can be.

Haken end the main part of their set with the 15-minute epic ‘The Architect’ and come back on for the encore of the 19-minute-long ‘Crystallised’. Both of these songs have enough in them to comfortably showcase everything that is fast making Haken one of the UK’s favourite prog metal outfits. ‘The Architect’ is dark, brooding and contains some incredible individual riffs and solos; whereas ‘Crystallised’ contains bizarre time signatures and vocal harmonising; all of which are performed so flawlessly it would almost be tempting to think it was easy. There is one treat left though to celebrate the end of this leg of their tour, and it is a thoroughly unexpected one. Haken are joined onstage by members of Vola and Bent Knee for a joyous rendition of Toto’s classic ‘Africa’. There was a real sense from this performance that all three bands had had a real blast on this tour, and it was truly infectious for the rest of the crowd who of course sang along to every word. This tour and this performance marks the turning of a corner by Haken into a truly astounding live act. Unlike many of their peers in the prog scene, there is no aloofness to speak of tonight. They mix the incredible musical ability which they already possessed with the real showmanship that has been lacking from previous live shows. This culminated into a performance that was every bit as entertaining as it was technically impressive, and those of us in the crowd were lucky to witness it.