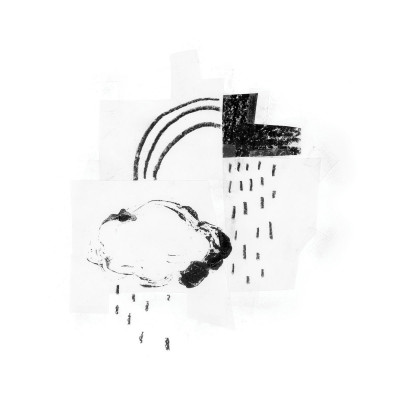 In A Shape Of A storm by Damien Jurado

Damien Jurado has been around for quite a while, over 20 years on the music scene, and has recorded so many albums that varied in their stance and atmosphere, that you could expect almost anything, from gentle, retrospective songs, to raucous rocking.

If you have any doubts what you are to hear on In The Shape Of The Storm, his new album, the stark, hand-drawn cover should leave you in no doubt – it is a stark, solo album in the strict definition of the term, it is just Jurado, his voice and guitar, with a sole exception of ‘Silver Ball’, and the title track, where Josh Gordon adds an additional high-strung guitar. But then, Jurado fans who know him from his live shows, know that he often appears in such a format and gives a striking performance.

No exception here, in that respect. As Jurado explained himself, he had songs prepared for the album, but he accidentally erased them. He decided to abandon those completely and do 10 completely new ones, which he prepared in a week and then did a final recording in over two hours. Instead of ending up with a dull and rushed solo effort, the effect of  In The Shape Of The Storm is quite opposite – it is a mesmerizing acoustic realm, with Jurado’s brilliant voice and lyrics coming to the forefront.

Part of the reason the album works is the obvious influence of recent death of Richard Swift, Jurado’s close friend and collaborator, even though Jurado doesn’t directly refer to his loss in any of the songs. It is just that this loss and melancholy permeate the whole album.

Another reason why such a stark album works is that Jurado keeps things brief, the album itself clocking at less than 28 minutes. But throughout the album, Jurado doesn’t break the sensitive line, nor does he resort to melodrama, just raw feeling, voice, and acoustic guitar.