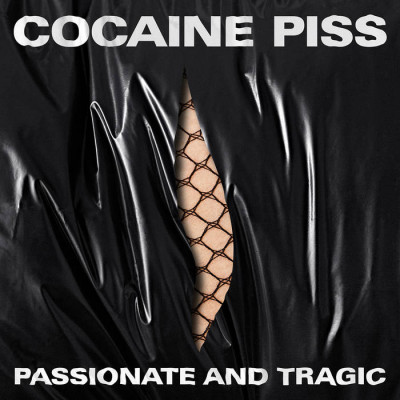 Passionate And Tragic by Cocaine Piss

Cocaine Piss follow up 2016’s The Dancer with new album Passionate And Tragic and it’s another haul of raw and energetic punk noise and sounds just as unhinged and vital as their debut album. Since that debut, the band have released a couple of EPs that have seen their music reach bigger audiences both through that recorded output and a whole host of unmissable and talked about live shows. Passionate And Tragic sees the band working again with Steve Albini who helmed their My Cake EP, which was released last year and the marriage of Albini’s production and the rawness of the Cocaine Piss sound is both unapologetically abrasive and undeniably impressive.

Passionate And Tragic sees Cocaine Piss let loose on twelve tracks of punk energy and noise rock that combines the vivacity of their live show with the more caustic Albini production and it works perfectly.

The album kicks off with the noisy garage rock of ’Sociopathic Friend’ and from then on in, it’s a wild ride that grabs you and doesn’t let go until the final strains of closing track ‘Happy Ending’ have rung out.

While many bands try to capture the intensity of their live show on record, most fail as the music becomes a bit too studio polished, but Passionate And Tragic does truly capture that live energy and the entire album could easily be the bands live setlist with Albini having done a sterling job of capturing the fury and energy of Cocaine Piss on record.

Tracks like ‘Pretty Pissed’, ‘Every Night I’m Waiting’, ‘Role Model’, ‘My Cake’ and ‘Poor Decisions’ are boasts of pure energy that beg to be played in a live setting to let that energy explode and the whole album basically evokes the spirit of bands like X Ray Spex, The Cramps, The Slits and Bikini Kill to create a cacophony of explosive and infectious punk noise.

Passionate And Tragic is a worthy follow up to the bands well received debut and sees Cocaine Piss going from strength to strength and cements their status as one of the most exciting bands on the planet. Do yourself a favour and devour this album, then go and see them live where the songs will no doubt take on a new life of their own in the most energetic and life affirming way possible.