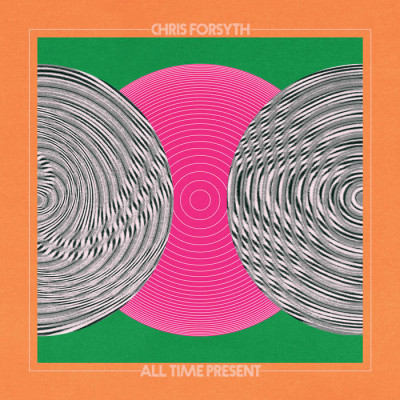 All Time Present by Chris Forsyth

Chris Forsyth may seem to release more albums than you can shake a psychedelic breakfast at, but at a quality rate which never dips below exceptional you can always rely on the goods to be delivered. Whether with Solar Motel Band as his cohorts, or solo, he never fails to provide interesting new paths as he takes his guitar in ever expanding adventures. Here on his new solo album, All Time Present, he sounds like some guitar-slinging journeyman as he amply unfolds his muse through a variety of instrumental and vocal tracks. Backed by long time compatriots Peter Kerlin and Shawn Edward Hansen, he also finds room for new guy Ryan Jewell who takes up drumming duties, and over the course of this double album finds time to push each member to their limits.

After a buoyantly progressive opener of ‘Tomorrow Might As Well Be Today’ which introduces Forsyth’s rather superb guitar skills, it’s not long before we are cast into the sprawling psych epic ‘Mystic Mountain’. Like some long lost Allman Brothers classic, time almost seems to become irrelevant as we are swept along to the raging guitars and pumping synths. Kept abreast by the solid backbeat of Jewell’s drumming, the song travails it’s lysergic path into a Cosmic Americana not felt for a long time.

‘The Man Who Knows Too Much’ is a slight come down after the highs of the previous track, but it’s slight lull only serves to prepare us for ‘Dream Song’, a ten minute explosion of distorted riffs double tracked with vocals from Rosali Middleman. Conjuring up the ghost of Crazy Horse in a free-falling barrage of noise, the synths fight with the guitars for space within the ever growing wall of noise. Played loud through large speaker, it feels like a mountain is falling on top of you.

Taking a trip into weirdness with ‘The Past Ain’t Passed’, Forsyth reminds us that he isn’t just about wall of noise guitars and it provides a pleasant respite after the monolithic previous track. It also leads us into ‘New Paranoid Cat’, a reworking of an older track and here he uses its simple repetitive melody to build into a wonderfully uplifting moment. Of course, it wouldn’t be that simple and Forsyth uses this as a base for launching off some rather fiery solo’s. More progressive rock than psychedelia, it’s this blurring of the boundaries that make his albums so exciting.

It’s soon back to the psych though, with the ambient trip of ‘(Livin’ On) Cubist Time’ which sees the music stripped down to its bare bones as Forsyth leads us through minor key changes into a trance-like state. This need for exploration continues further with final track ‘Techno Top’ which is a gloriously transcendent twenty minutes, a million miles removed from the Crazy Horse guitars of earlier, yet still cut of the same cloth.

Due to the drawn out experimentations, this album may be more for the hardened Chris Forsyth fan, although for the brave new listener it does offer a unique starting point. The scope of the album is such that many of the different facets of his music is included, with the only downfall being that the extended jams may be too much for some. For the already initiated this is yet another excellent addition to a catalogue of music which simply stands head and shoulders over much of its peers. Once again Chris Forsyth unleashes another album which redefines the line between psych, Cosmic Americana, and progressive rock.